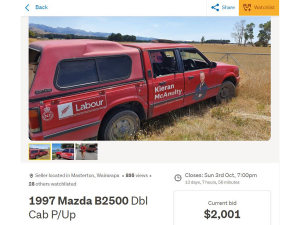 Kieran McAnulty, Labour MP for Wairarapa, is selling his ute on TradeMe.

“The time has come to upgrade,” he said in a tweet this morning.

The red 1997 Mazda B2500 ute was a feature of McAnulty’s 2020 campaign for the Wairarapa parliamentary seat.

The ute became the subject of minor controversy after McAnulty won the Wairarapa seat, with National MP Chris Bishop calling for McAnulty to give it up after the announcement of a Climate Change Emergency in December 2020.

I am selling my ute for charity.

The time has come to upgrade.

The ute became controversial again after the Government announced its Clean Car Discount Scheme – dubbed by many as the ‘ute tax’ – when photos of Prime Minister Jacinda Ardern driving the ute during the 2020 election campaign resurfaced.

The ute is being sold on Trade Me with an opening bid of $2,000 already placed.

In his tweet, McAnulty said that all proceeds from the sale of the ute will go to Rural Support Trusts in the Wairarapa, Tararua District and Central Hawke’s Bay.