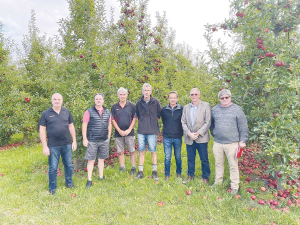 At a media conference held in Hawke's Bay last week, sector representatives called on the Government and Immigration Minister Kris Faafoi to develop a plan that would allow more Pacific Island workers into the country in the year ahead.

They want to avoid the devastating impact that is happening to the current season's crop as the labour shortage hits crisis point with fruit with harvesting is at its peak.

Small orchardist and exporter, Bruce Mitchell - whose family has been orcharding for over five decades - left six blocks of Royal Gala apples on the trees this season as he couldn't get anyone to harvest them.

"It's so devastating to see the best gala apples I've grown just rot on the ground because we didn't have anyone to pick them," he explained. "I was desperate and did everything I could to find people to harvest the apples. On the day we started, I was expecting 20 pickers but only two people turned up so we physically couldn't pick 40% of the gala crop."

Mitchell is among hundreds of small to large orchardists and exporters who have either left export quality fruit on the trees or have compromised quality as the fruit hasn't been picked at the optimal time.

New Zealand Apples and Pears chief executive Alan Pollard says he's aware of leases not being renewed, blocks being pulled out and not being replaced and new tree orders being cancelled.

"Now that the harvest is at its peak, these labour shortages are a reality and we are seeing devastating consequences for many growers and exporters, including a serious impact on mental health and resilience," Pollard said.

"We cannot have a repeat of what has occurred this season. We estimate that we need at least 21 weeks from a government decision to the time that the workers need to be deployed - so there is real urgency to find a workable alternative solution."

Meanwhile, Watties agriculture manager Bruce Mackay says his company relies on locals, backpackers and those with seasonal work permits for seasonal work in the factories, but this season the labour pool has been stretched thin and far.

Watties Hastings factory has been up to 50 people short each day.

"We have been shutting down production lines to redeploy staff and keep other lines running and processing half the bins of some crops in a day that we usually would," Mackay explained.

He added that this backlog, created by the slow throughputs, has meant the season has been pushed out, with a real risk to quality.

Mackay says the company even had to sell one of its corn crops elsewhere as it was unable to process it.

Yummy Fruit owner, Paul Paynter, says his harvested crop will be down 25% due to the labour shortage.

His company have left apples on the trees and been very short of staff in the packhouse.

John Bostock - the country's largest organic apple grower and exporter - pointed out that Bostock New Zealand had gone all out and run massive recruitment campaigns to try and recruit New Zealanders to work, but the people just aren't there.

"No matter how hard we've tried, we have struggled to recruit New Zealanders to our cropping fields, orchards and packhouses. We cannot continue like this. The impact endured this season was avoidable and forseeable. We cannot get throuhg another season without the certainty of labour."

The group is calling on the Government to announce a plan for the return of RSE workers from Covid Free Pacific Island countries and work with the sector to allow more Pacific Island Workers into New Zealand.

"We urgently need a plan for 2022 to avoid the carnage we have seen this season."

Back in March, Paul Paynter told Rural News that Hawke's Bay multi-million dollar apple industry was facing a crisis because there were not enough people available to pick the apple crop.

He described the situation as an "impending crisis" and warned that unless they got sufficient pickers, there was a serious chance that $100 million worth of apples won't be picked this season.

Paynter told Rural News that 20% of his fruit will not be picked. "It's been traumatic here and you can drive down the road and you can see a Royal Gala block that hasn't been picked and it doesn't look like it's going to be picked," he said. "We need another 140 pickers in the next week or so and I have no idea where we are going to find them."

Paynter pointed out that the apple industry was worth more than half a billion dollars to the Hawke's Bay economy. He warned that with upwards of 20% of this season's crop not being picked it will have a huge impact on the region. "If the crop isn't being picked, and wages are not going into the community, the whole regional economy will suffer financially."

National has called on the Government to move faster on a Pacific bubble.

Horticulture spokesperson David Bennett says his party supports the call by Hawke's Bay orchardists and businesses to open a travel bubble with the Pacific Islands.

"Growers and processors have good reason to be frustrated at the Government for not acting fast enough. The Minister of Agriculture recently confirmed he has not prepared any papers for Cabinet this year relating to a Pacific bubble, despite calls from the sector."

"Once again, horticulturalists will be left in a situation where any attempt to help will be too late and limited in effect," he added. "We've already seen substantial losses this season. It's imperative that the Government acts now for next season."

The horticulture and winegrowing sector will have access to an additional 1,600 more workers this season after the Government agreed to increase the Recognised Seasonal Employment Scheme (RSE) cap to 16,000.