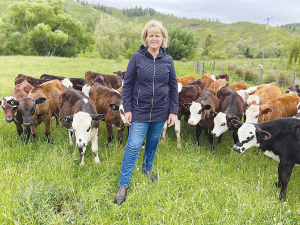 It’s hardly surprising, given she happens to be involved in a raft of initiatives throughout the region that are always designed to inspire, add value and help others.

Wilson has just been honoured as the 2020 Rural Women New Zealand rural champion, an award she says was quite humbling to receive.

But her list of projects, community initiatives, boards and organisations tell the tale of a woman who is entrenched in the rural community and thrives on seeing others grow.

The East Coast Farming Expo – an event designed for the region’s sheep and beef farmers – is one of her projects. It’s deliberately held mid-week so farmers can do their morning chores before spending the day at the Expo and make it home in time for tea.

“It is a chance to have serious conversations with industry innovators and colleagues. There is always something new being rolled out, so it is ideal to bring everyone together to see and hear all about it.”

The Expo idea was hatched in 2015 when Wilson and Wairoa A&P Society president Dave Martin were looking for new ways to utilise the showgrounds after a major revamp of the grounds and buildings.

“It is a struggle to get to the larger field days to see new stuff that is useful for farmers from the East Coast,” she says. “So, we thought why not bring the experts to us.”

From there, it rolled out very easily with the first Expo held in 2016. The seminars were put together to compliment the exhibits which were all about quality, innovation and usefulness. Don’t expect to find any lifestyle-type exhibits here.

Finding support for the Expo has never been tough either.

There is plenty to love about the Expo, but Wilson says two things stand out.

“The people we meet and that we are always learning new ways to farm smarter,” she says.

Wilson reckons there is simply nothing better than seeing a hall packed with like-minded people engaging with each other. She feels that while women continue to show just how valuable they are to farming, there is still some work to be done around gender equality in the primary industries.

“There is still the odd one who believes women belong with their hands in the sink, but I think it will be a generational shift to bring everyone onto the same page.”

A few years back, Wilson developed a women’s networking group in Wairoa.

“It was another way for women to meet other local women who were often stuck out on farms with barely any social interaction with other women.”

Wilson grew up just south of Hastings, on a farm in the Ngatarawa triangle, where her father was a fat stock buyer for Borthwicks while also running a trading operation. She and her three brothers were her father’s workforce and from a young age she was happily driving the Fergie with the rake on behind or the old TJ Bedford truck with the hay elevator.

Their life was busy with sport, music, horses and adventures, and it cast a mould for how she and husband Fenton have raised their own three children on their farm on the outskirts of Wairoa. All three children are now involved in careers in the agricultural industry.

Her involvement with the Wairoa A&P Society continues to be a huge part of her family’s life. The Wilson family have been involved for five generations and around this time of year, much of their ‘spare’ time is at working bees getting ready for the big January show.

It’s another thing on a growing list for Wilson who also has two companies of her own – SMWDesign and Event Management as well as the boutique food business The Wooden Spoon.

Rural Women New Zealand (RWNZ) says it is delighted to see a focus on women’s health in New Zealand.

Rural Women New Zealand (RWNZ) is marking International Women’s Day by reminding the rural sector why the day is important.

The Government’s announcement of a connectivity upgrade is being met with cautious optimism.