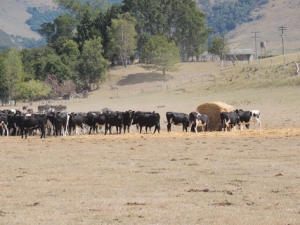 It is vital to plan feed well ahead.

Federated Farmers North Canterbury say farmers affected by the drought are facing a tough year ahead and will be struggling with some tough decisions.

“It is not a great time for farmers in North Canterbury, most of us are facing a year of little to no feed, low stocking rates and substantial financial losses,” says Dan Hodgen, Federated Farmers meat & fibre chair.

“With the drought leaving us with a significant lack of grass and crop growth, we are either having to sell capital stock at a much lower rate than we usually would or having to buy in supplementary feed. Some farmers are doing both.

“While there has been a good supply of grain available due to arable farmers not being impacted by the drought to the same extent, farming is so intermixed that the fortunes of one sector cannot be divorced from others. So with lower pay-outs for dairy and sheep and beef farmers it has affected our ability to buy their grain.

“Sheep and beef and arable farmers who winter graze dairy cattle are also taking a big hit as winter crops are not what they should be, meaning they can’t carry as many cattle this year.”

North Canterbury dairy chair, Cameron Henderson says the while dairy farmers in general aren’t doing it as rough as the sheep and beef farmers, they have to go further for grazing support, which comes at a cost.

“With the dairy payout continually dropping the pressure is mounting in North Canterbury,” says Henderson

Hodgen says the conversations he is hearing amongst sheep and beef farmers north of Amberley and south of Kaikoura are that most are expecting extra costs to be in the six figures.

“This is going to be a huge loss for farmers to try and build back from. With lost production next season due to potentially lower lambing rates, and the costs of replacing capital stock when demand is likely to be high farmers need to plan ahead.

“Farmers have little they can control right now but the things they can are their feed plans/budgets, stocking rates and support.”

Hodgen says that farmers need to be looking at the trade-offs around buying in feed or destocking. While he admits that it is a tough decision, he says it has to be made.

“My advice is that if you are selling capital stock it is important to try and ring-fence that money for replacing them.”

If they have not already, Hodgen encourages farmers to have conversations with advisors sooner rather than later. “It’s also vital to plan feed well ahead, with a shortage in grazing support, including Hogget grazing, and access to supplementary feed,” he says.

“Another option would be to look at bringing shearing forward, which may mean that farmers won’t have to increase the amount they’re feeding so sharply, if they do it whilst it’s still warm.”

“It’s worth talking to your shearing contractor to consider leaving a thicker coat on for the winter too. I use a new lifter, which has been developed by my local contractor in the last few years. In the past it has reduced the extra feed the ewes need post shearing, in a tight year like this that may make a big difference.”

Hodgen encourages farmers to use the Federations’ Feed list by calling 0800 376 844 and utilising the drought information/advice webpage.

“If anyone has grazing or baleage available, they should list their details on our Feedlist.”

Hodgen says farmers do not need to tough it out alone. “We’re all struggling, and you’re not going to lose your “Man Card” for asking for help or support. The Rural Support Trust is still in action for North Canterbury so give them a call on 0800 787 254,” he says.

“The events they are organising around the region are great and while it is often hard to convince yourself to go, it is always worth it. Quite often just a beer and a yarn can help far more than you would expect.” Hodgen concludes.