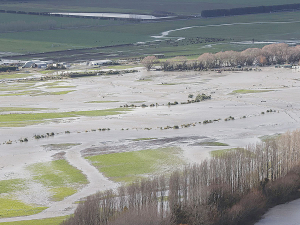 “Jacinda Ardern and Damien O’Connor flew into Ashburton with cameras rolling to announce a $4 million Canterbury Flood Recovery Fund – indicating that it was just a start, that they were still working to establish the full scale and cost of the damage – and that there would be more where that came from,” says Grigg who is MP for Selwyn.

She says the fund offers grants of up to 50% of eligible costs with a total limit of $250,000 and will contribute to uninsurable costs to enable productive land to return to a productive state as quickly as possible.

“Essentially, it can only be used for the clearing up of flood debris such as boulders, gravel, trees, and silt on productive land. Insurable costs, such as replacing fences, have not been targeted by the fund.”

“Four months on and the Ministry for Primary Industries (MPI) has received 168 applications for support, with a total monetary value of $8,029,535.

“To put the number of applications into perspective there are over 550 properties in the ArcGIS survey database, suffering varying degrees of damage.

Grigg says that the criteria set for the fund requires 51% of income to be from the primary industries, meaning lifestyle blocks listed in the database were ineligible.

She claims that some listed in the database as sheep or beef farms have other income streams, including tourism and rental properties which exclude them from applying because they don’t meet the 51% threshold.

“In my view, that absolutely stinks. The Government set a criteria that was very difficult for highly-stressed, overworked and exhausted farmers to meet,” she says.

She says that while MPI has accepted 82 applications, they’re only paying $1,428,964 to those farmers and have declined a further 38 applications on the ground they don’t meet the eligibility criteria.

“And therein lies the problem – the eligibility criteria is far too strict and, therefore, discounts hundreds of affected farmers and landowners. The monetary value of the applications alone indicates the Government is way off target.”

Grigg says that O’Connor needs to instruct MPI to loosen its eligibility criteria and get the money to the farmers most in need.