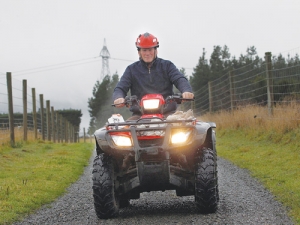 Former All Black hard man Richard Loe is leading the charge for farmers to improve their on-farm safety record.

He was an imposing force on the rugby field and now ex-All Black great and rugby icon Richard Loe wants farmers to stand up and take notice about safety.

The 49-test veteran, three-time All Black captain and farmer is the new Safer Farms ambassador for Worksafe NZ and ACC.

Taking advantage of the kudos Loe has with his fellow farmers, Worksafe's programme manager agriculture, Al McCone, asked the former All Black and farmer to be the front man for the new campaign.

Loe had worked with McCone previously on an in-house induction video for new staff at Landcorp and saw the merit in Worksafe's new campaign.

"We have to farm smarter," Loe says, referring to the 96 deaths in farming since 2011 – three times more than the nearest industry (construction) and almost four times forestry.

Twenty six of those fatalities involved quads, and McCone points out that all the 26 killed were farm workers -- none were recreational riders. Normally almost half of all agriculture fatalities involve either quads or tractors, but last year almost of 50% were from quads only.

The serious harm notifications also paint a telling picture: farming is fourth-worst, meaning that when something goes wrong in agriculture it tends to go wrong tragically.

McCone calls the situation in NZ farming appalling and unsustainable: we suffer twice the fatalities of Australia and triple those of the United Kingdom; clearly something needs to change.

And that's where the former All Black hard-man comes in. When talking about safety, Loe asks the question, "What are we as farmers doing to prepare ourselves for the task ahead?"

Using Julian Savea's current form in Super Rugby as an analogy, Loe says look at the turnaround in his form with two weeks of intensive training and apply that to farm tasks. He asks, do farmers do any training before going out to do their work?

"For example, say you've managed to get away for a holiday break overseas and when you return it's straight into calving, and you're out there in all weathers lifting calves in ever-increasing numbers," he explains.

"When was the last time you did any serious lifting before setting out into the paddocks? Was it last year or was it last month? Did you do any stretches to warm up?"

Worksafe's Al McCone says a large percentage of farm injuries result from lifting and/or slips, trips and falls. About 60% of farm injuries involve livestock, to which Loe references the campaign catchphrase 'manage the risk'.

He says identifying areas on the farm that can cause harm and doing things to mitigate that risk should be second nature, i.e. spraying when it's calm and using the proper protective gear to limit your exposure to agri-chemicals.

Quoting fellow All Black great Michael Jones saying it is better to be giver than a receiver of pain, Loe says no farmers set out to hurt themselves.

"So look at your whole operation and look at what you already do and how that applies to your health and safety."

Loe says farmers want to know what the new legislation means to them and how it will affect them; most are concerned about paperwork and workloads.

Showing his pragmatic side, Loe points out most farmers normally carry a notebook where they record data about their farm -- sheep tallies, when and where they spray, animal health conditions, vehicle maintenance and servicing requirements, etc.

"This data is already creating a paper-trail of the processes across the whole farm that can be extrapolated into health and safety procedures."

Loe recommends farmers do a Worksafe audit of their farm as he did and get the 'tick'.

"It will validate your existing procedures or point out areas of improvement and that process will make you a better farmer," he says. "It will also place your farm in a better position if something does go wrong, as you will have been recorded as working to best practice."

With the Government's goal of reducing instances of serious harm or death across all industries by 25% by 2020, Loe, farmers and Worksafe will be busy in the coming four years.

Heads up on a good hat

Quad safety is back in the news in Australia, where the Government has ruled that rollover protection will be mandatory within 24 months.