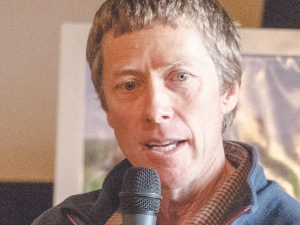 Hackles rose over freshwater issues at a packed public meeting in Christchurch earlier this month.

As in other meetings around the country on the Ministry for the Environment (MfE) consultation on a proposed National Policy Statement (NPS) for freshwater, farmers attended in big numbers.

The meeting room at the Sudima Hotel was brimming.

MfE director water Martin Workman said it is harder to set a national standard for freshwater than to track progress against a 2050 zero carbon target. He conceded that there is a lot of difference between catchments and that some regions may find it harder to reach a national target.

He said it is important for communities to work through what makes sense for their local areas.

Workman expects a new NPS for freshwater will change the way local authorities and the Government handle resource management consents.

“We’re seeing, with all this national direction, there’s a lot more Government oversight being proposed to ensure this does have teeth and that we achieve the quality of environment we aspire to,” he said.

The Environmental Protection Authority is setting up an enforcement unit to “help councils take enforcement across the country”.

Under proposed changes to the Resource Management Act, the authority would have the power, as councils do, to take law breakers to court, Workman said.

A North Canterbury farmer, Jamie McFadden, said he has been helping farmers to protect waterways, wetlands and waterways for the last 20 years, but it now appears those landowners would be penalised for being proactive.

“We’ve got some farmers who have a lot of wetlands on their property, which we’ve encouraged them to protect. They’re going to have to incur huge costs under this freshwater legislation.”

McFadden questioned how much analysis is done of the impact of regulation on different farming sectors. Farmers around him in hill country Cheviot feel under siege from a raft of demands, eg freshwater improvements and biodiversity programmes.

“In our area, traditional sort of hill country farmers are getting out because they’re sick of the amount of regulation and constant penalising of good farmers. And they’re getting out.”

McFadden is part of a group – the Rural Advocacy Network – which walked away from the Hurunui-Waiau water zone committee. The group accused Environment Canterbury of using the province’s zone committees to pursue its own agenda.

Workman said investigation is ongoing as part of its consultation on freshwater policy “and the intent here is not to stuff up farmers doing the right thing. It is to encourage others to be doing this”.

A Fish and Game officer at the meeting said this is the first time in her nine years with the organisation that she feels hopeful about improvements in freshwater quality.

But a Banks Peninsula farmer, Pam Richardson, urged policymakers to be careful what they wish for.

Richardson, who has led conservation projects on the peninsula for decades, asked whether planners are taking pest and weed control into account.

On the peninsula she has already noticed gorse and broom “jumping out everywhere” because of setbacks on waterways. “I wondered if there’s been any thought put into… with all these areas fenced off, how you would manage them.”

Richardson questioned the likely costs of new water policy. Many people, including city folk, are telling their councils the rates are unaffordable, and councillors are usually loathe to spend big on improvements.

At Akaroa, within the Christchurch City Council territory, the local body has been reluctant to spend $34 million on the town’s sewage system, Richardson said.

“The city council can barely afford that with all the other things going on. So how are we going to afford all these extra requirements from ratepayers who say, ‘we can’t afford a rate rise’?”

Another MfE representative told the meeting there is a large cost for improving public water and sewage treatment services.

“We are going to have to work through this as a country: just like we’re talking about on farms.”