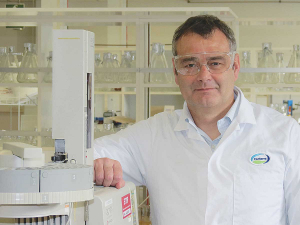 Jeremy Hill says Fonterra wants to see how Bovaer could work in NZ cows that are predominantly grass fed.

The Bovaer feed additive, developed by global science company DSM, has reduced methane emissions from cows by over 30% in non-pasture-based farming systems in Europe.

“We also see this as an opportunity to further accelerate our global leadership in low-carbon dairy products to create more value for our New Zealand milk.

“Fonterra is working closely with DSM New Zealand to ensure that any innovation is well tested and can easily be distributed and used by our farmers.”

It is under registration in other parts of the world.

“This is one reason Fonterra committed to this collaboration; to ensure New Zealand is in a leading position to roll out this technology for the farmer owners,” he says.

In December, a collaboration with Finnish dairy producer Valio was also announced.

“And in December, we reported on the largest and most extensive trial on methane inhibitors for beef...during the trial itself we saved nearly 1,500 tons of carbon dioxide emissions,” van-Nieuwland says.

While results from initial studies overseas have shown promise in non-pasture-based farms, more research is needed to understand the level of methane reduction that can be achieved on New Zealand farms.

Van-Nieuwland says testing is now underway with Fonterra to confirm this for New Zealand.

Asked about the cost of Bovaer, van-Nieuwland says successful methane mitigation solutions need to be cost-effective and easily adopted by farmers, and able to be counted against NZ’s greenhouse gas inventory.

“Commercial viability of the product will depend on the value to farmers of methane reduction and the ease of using the product compared to other potential mitigation strategies,” he explains.

“We are well aware of these considerations, and we believe we are on track to deliver against those.”

New Zealand dairy farms are acknowledged as having the lowest carbon footprint in the world among major milk producers. Recent analysis done by AgResearch, released last month, showed that New Zealand retains its outstanding position in low-emission dairy milk production, with an on-farm carbon footprint 46% less than the average of 18 countries studied.

Fonterra admits that biological emissions from cows are a major contributor to the country’s overall emissions.

“We need to find a breakthrough in reducing emissions from cows and Bovaer could provide exactly that. This work with DSM is an exciting opportunity for the co-op.”

Nieuwland says DSM is proud to be in collaboration with Fonterra.

“Both companies have worked together for many years, and it’s a pleasure to extend this to the field of sustainability and climate change,” he says.

“With Fonterra, we have an important partner to potentially commercialise Bovaer in New Zealand and globally. We look forward to combining our expertise and passion.”

According to DSM, Bovaer is a feed additive for cows and other cattle and ruminants - such as sheep and goats.

The production has been researched and developed over ten years by DSM. The company claims that just a quarter teaspoon of Bovaer per cow per day reduces enteric methane emission by approximately 30%.

DSM has filed the feed ingredient for commercial registration under the trade name Bovaer around the world. It is also working with partners from the dairy and beef value chain to prepare for the product's market introduction.