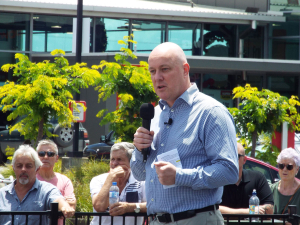 Shadowed by a host of National MPs including agriculture spokesperson, Barbara Kuriger, and local MPs Tim van der Molen and David Bennett, Luxon spoke beneath the Mega Cow on Thames Street to a crowd of around 350 people.

In a sign of the times, a white picket fence separated the double vaccinated, Covid-passport wielding public – who received seats, shade and sustenance – from those who did not comply and had to stand on the pavement.

Warmly welcomed by the crowd, Luxon delivered a potted history of his family and working life to date, letting slip the fact that he liked Minis – the iconic car that is, not the ridiculously short skirts of the 1960s.

Speaking confidently, often in a self-effacing manner, he talked about his time at Johnson & Johnson and Air New Zealand. In the case of the former, he questioned the price he paid to acquire some haircare companies, given his now largely pink hairstyle.

He then moved to the politics of the day, in what was his first public presentation to New Zealanders. “It’s time to put the past behind us and move forward, talking about the people of NZ and not ourselves.”

Luxon suggested that National’s job was to oppose and propose solutions to the problems of the day and beyond.

“Having travelled the world, I can assure you that NZ is the best country on planet Earth, but under the current administration we have become inwards-looking and fearful,” said Luxon. “But the reality is we need to back people who want to make things happen and go out and do business with the world with confidence.”

He said that the current Government doesn’t understand farming and rural New Zealand, noting that 80% of the country’s exports are from agriculture, the industry employs around 350,000 people and generates around $9,000 income for every individual in the country.

“The industry needs to be respected, so I urge you never to apologise for being a farmer or rural person.”

Looking at the sector in more detail, he said that addressing climate change by reducing the size of the national dairy herd was not the way forward, suggesting that this would just export the problem to other countries with less efficient dairy farming.

“Current government policy is about caution and stopping things happening; something akin to trying to return 10 tennis balls served at once, in the shape of multiple dysfunctional regulations being heaped on farmers from the corridors of Wellington,” he said.

He said the National Party will propose solutions in a pragmatic manner, using science-based data, including looking at freshwater reforms on a catchment-by-catchment basis rather than “robbing” infrastructure developed and funded by local councils over many years.

He also noted that water storage would be prominent on the agenda, alongside addressing the immigration log jam that stopped the right people with the right skills being allowed to fill many job opportunities.

“This is a great day for baldies,” he said. “We have a great country that currently suffers from unrealised potential. We want New Zealand to get its mojo back, with aspiration and confidence, so we need a government who sets up the rail tracks and then gets out of the way.”

Christopher Luxon says the present government has spent much of its time running around with problems in search of solutions.