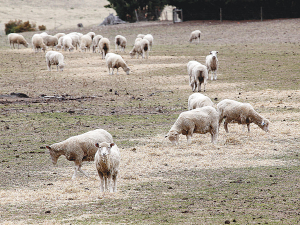 Destocking may seem like the best option for some Marlborough farmers, says farmer Warwick Lissaman.

Speaking following a recent well-attended drought meeting at Ward, Lissaman says farmers’ needs varied case by case. For some, it’s about personal support and relationship issues, and for others very much just animal feed and water.

He adds that some have too many animals for the feed they have, and some have feed but no water because stock water dams have had no infill for two years.

Farmers are facing extremely low pasture growth rates – zero to five kg of dry matter per hectare per day – so can’t “just fiddle” with the stock numbers, he says.

Lissaman says many farmers were at between 40% to 60% of their expected stock numbers at this time of the year, but will still be short of feed if there’s no rain-fed growth in May and June.

“You can’t de-stock the whole East Coast region by 80% for example and place those animals anywhere, to then bring them back. There just isn’t anywhere for them to go.”

For Marlborough, the worst-hit area is the Flaxbourne River catchment around Ward.

Lissaman says his own farm, near Seddon, is on the cusp of the really dry area. However, he says the drought hit home to him about a week ago when he realised some of his driest slopes had gone a grey colour, meaning the dry grass cover was now so thin that he was seeing the soil underneath.

“I haven’t had to graze those areas and I still haven’t grazed them but they’ve gone grey without me grazing them.”

In a normal summer they would go golden or bleach to white but then go green when the rains came, he says.