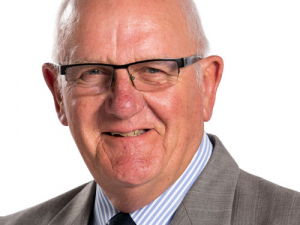 The NZ National Fieldays Society has a new president.

Waikato businessman Peter Carr was elected by Society at its annual general meeting (AGM) this month.

Carr had previously served as Fieldays Society vice president and chair of its structure committee.

NZ National Fieldays Society chief executive Peter Nation, who reports to the board, said he was delighted with the new president.

“He brings an eye for rural business, a community focus and an understanding of how local government works,” said Nation. “We are pleased to welcome a president who is approachable, has worked with a diversity of people and can help the Society and its assets to grow.”

Originally from Yorkshire, England, Carr has had a long career in shipping, logistics and management. He has lived in New Zealand for more than 45 years and has strong roots in the Waikato and Cambridge communities.

As well as the president’s role Mr Carr will chair the NZ National Fieldays Society board.

Carr said the president’s role was both an honour and a “juggling job”. Although he was mindful of the Society’s rich history, Carr said he was eager to look at new opportunities for future commercial growth for the Society.

“Last year we recorded 109 event-days, and Fieldays was just four of them,” said Carr.

“Equidays began six years ago and that’s had good success. Looking forward, we want to consider where there are gaps in the calendar and how can we fill them. There is opportunity for growth. Watch this space.”

Carr thanked the outgoing president, Warwick Roberts, for his efforts, as well as those of outgoing board members.

Nation says he is looking forward to working together with Carr on implementing the Society’s new five-year strategic plan, which was approved earlier this year. The Society’s revised vision includes growing new events, improving the site, investing in charity and growing the Agricultural Heritage Village.

He said the president’s role is a vital one for the Society, especially significant with the Society’s 50th anniversary little over one year away.

“Fieldays is a world-class event on the world stage, and the Fieldays Society president’s role is one where you are mixing with presidents and politicians and leaders, not only from New Zealand but overseas,” said Nation.