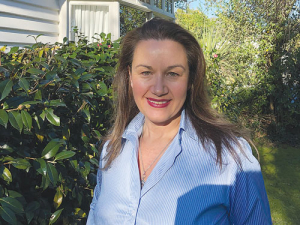 To hit targets and ensure a flow of young talented people coming into agriculture requires connecting with everybody.

This is the view of Lynda Coppersmith (48), who takes over as Young Farmers chief executive on October 1.

“If that means we need to do more to connect with women and show young women there is a career path, then let’s do it,” says Coppersmith.

“That increases our chances of ensuring we have a sustainable pipeline of young people coming to work in the industry.”

Young Farmers is a good channel for that, she told Rural News.

“Particularly in urban spaces, we are competing with other industries for young people so we have to get their interest early. We have to get them excited about all the opportunities and if we can start in schools that is great.

“But they have to be excited about all the opportunities, not just the onfarm ones. There are all the other roles they can play in this great industry that they need to get excited about; let’s do it.”

The tech-savvy business leader says this includes making them aware of the sophisticated technology onfarm these days and how farming has almost become a tech industry.

Prior to MYOB, Coppersmith worked for DairyNZ, was a business development manager for the Livestock Improvement Corporation (LIC) and an area manager for Fonterra in Timaru.

She didn’t grow up on a farm. The only association she had with a primary industry before her LIC job was her family breeding racehorses, originally in Hawkes Bay and now Cambridge. Her cousin is one of the top trainers in NZ.

“That is a good message: it shows you don’t have to come from a farm to get involved in the farming sector.”

She says Young Farmers NZ has raised its profile.

“During my time with DairyNZ in 2011-2012, Young Farmers had a high profile in the industry.

“But with the work done in the last few years – led by Terry – in getting more profile in schools and giving schools the tools to get young people interested, it has had more of a profile in the urban space.

“My kids both go to city schools in Christchurch and they both know what TeenAg is and have friends involved.”

While it is too early to say about the strategic direction of Young Farmers, Coppersmith says she is interested in the concept of the ‘the future of work’ -- what that looks like and what we need to be doing to ensure employers meet the needs of young people entering the workforce.

“And work needs to be done to educate employers on what young people expect from an employer. And what they will want over the next 5-10 years from their employers. It may be different from what we know now as a good employer.

“We may need to look at that to see if there is any value we can add there.”

Coppersmith says her predecessor has done a great job of bringing Young Farmers to where it is today.

“I am looking forward to getting stuck in to see what I can do.”

Cow collar firm on the move