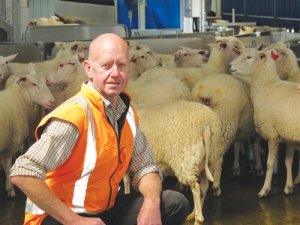 A world expert on the sheep milking industry says UK farmers would be envious of the level of research being done in New Zealand into sheep milking.

John Ryrie, from the UK and now managing the Spring Sheep Dairy operation on a Landcorp farm near Taupo, told Rural News that the NZ sheep milking industry is backed by good research. He says the research in NZ is by highly competent people and supported by government agencies.

But while there is growing interest in the sheep milking industry in NZ, Ryrie says people need to have realistic expectations of what can be achieved and not draw comparisons to the bovine milk sector. He says it won't replace bovine alone in the quantity of milk produced.

"I also don't think it's a fad. Fads signify to me short-lived and this is not short-lived. There is a market in China among a large population with specific needs for sheep milk products for nutrition and digestive requirements," Ryrie explained.

"The other factor is a cow will give you 3000L a year in NZ, whereas a sheep will do 400 to possibly 800L a year. So it's important that sheep milk is not a commodity product. This is a product that can be refined and produced for specific markets and for specific people in the population."

Ryrie says much changed in the NZ sheep milking sector in the space of a year, as reflected in this year's conference. A year ago the talk was about the potential of the sector and what could be done, he says.

"This year we have more sheep milking flocks established, we are looking at components of milk and where to go with those components in the market. It's a credit to the organisers of the conference and to the research bodies involved and all the farmers who have taken up the challenge of sheep milking."

Staff trained and ready to go

A year ago John Ryrie moved from the UK to NZ to head up Spring Sheep Dairy, a joint venture between Landcorp and a marketing company, SLC.

The first year has passed in setting up the farm and training staff in the art of milking sheep. Ryrie says when the new season starts, the staff will be ready to go and will understand the systems – no stress.

With the initial setup done, Ryrie says they are now looking to improve the genetic composition of the flock.

"We are looking to import genetics to improve and broaden the bloodlines within our flock. We will probably bring in a mix of semen and embryos," he told Rural News. "Semen is the quickest fix because we can get a large number of semen straws in to cover a large number of our ewes in the short term; but to get very specific, high-quality bloodlines we'd use embryos."

The latter will take time given the approval process which Ryrie supports. He says safeguarding NZ's biosecurity is paramount. But once approval is given it will be a great opportunity for NZ to expand its genetic pool of milking sheep.

Ryrie says he's delighted to work in NZ and while there are challenges – including facial eczema – he believes these can be overcome. NZ's drier climate will result in less foot problems and overall the sheep milking industry will do better here than in Europe.