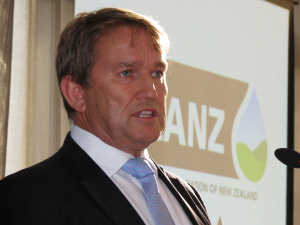 DCANZ chair Malcolm Bailey welcomes the intent of the UK to join the CPTPP, but wants the New Zealand Government to send a strong message to the UK about how it must honour its commitment to global trade.

Last week, the UK stated its intention to apply for membership of the CPTPP and the moved was welcomed by Trade and Export Growth Minister, Damien O’Connor.

But the chairman of Dairy Companies Association (DCANZ) Malcolm Bailey says, while he welcomes the intent of the UK to join the group, he wants the New Zealand Government to send a strong message to the UK about how it must honour its commitment to global trade. In other words, walk the talk.

Bailey says before being admitted as the first nation outside the trans-Pacific region to benefit from CPTTP, the UK must fully embrace free trade.

He says the UK’s application to join CPTPP is another great sign of its interest in advancing global trade liberalisation. But he says the real test of UK trade leadership comes from how it honours its existing commitments and what it is prepared to put on the table in negotiations.

“Despite the UK’s strong statements of ambition, including for a high-quality UK-NZ FTA, we are yet to see it remedy concerns about diminished quota access following Brexit and we have detected hesitancy on its part to bringing real liberalisation to the FTA negotiating table,” he says.

“Avoiding a disconnect between intent and action is important if current and potential trade negotiating partners are to have confidence in the UK’s stated ambitions.”

Bailey says the NZ dairy sector is placing priority on the UK-NZ FTA agreeing an end-point of comprehensive tariff elimination for all dairy products. He says this would put New Zealand dairy exporters on par with European exporters in terms of the level of market access they have had into the UK market for nearly 50 years.

Bailey notes that the UK has reconfirmed its ability to provide full liberalisation on dairy through its recently concluded bilateral trade agreement with the EU.

“The UK, as a major economy forging its own independent trade policy, has a unique opportunity to set the tone of global trade policy at this crucial moment,” he says. “The world needs frictionless trade to support Covid-19 pandemic response and economic recovery, and as protectionism threatens to rear its ugly head in other countries’ Covid-19 responses, unequivocal leadership from the UK would give the global economy much needed confidence.”

Meanwhile, the DCANZ chair’s comments have been echoed by the National Party’s trade spokesman Todd Muller, who says it is time to address the eye-watering gap between the UK rhetoric on free trade and its current approach to NZ.

“We have just started the third round of negotiations with the UK for a wider ranging and ambitious FTA between our two nations.  One of the key negotiating points, as it is with all our export markets, is for our dairy, sheep and beef exporters to avoid paying huge tariffs to access British consumers,” Muller says.

“Since 1973 we have had significant meat and dairy low tariff quotas for both the UK and the EU. Despite enormous protests, these have been split with the UK leaving Brexit, thereby reducing the quota potential significantly.”

Muller says there is also a “seismic gap” between how the UK treats their farmers and how we support our own, with British farmers being subsidised to the tune of US$3.3 billion a year while NZ farmers get no subsidies.

He says initial smoke signals around the FTA are not hopeful and do little to reduce the sense that the UK’s ambition for free trade is more “fog like than the piercing light of freedom” it purports to be.

He says it’s good to see that the UK intends to take the formal step shortly to start this process.

“The challenges facing the global trade and economic environment have been compounded by Covid-19. NZ sees the CPTPP objective of maintaining and growing open, rules-based trade, as more important than ever.

“We believe the CPTPP can provide leadership in our region and beyond to drive post-Covid economic and trade recovery.  The UK’s move to join the CPTPP underlines the agreement’s importance in this regard.”

O’Connor says to start this process, the United Kingdom needs to present a letter to New Zealand, as depositary for the CPTPP, formally expressing its interest in joining the 11 member trade agreement. Under CPTPP guidelines, the next step will be for all CPTPP members to discuss the United Kingdom’s request and establish a working group to negotiate UK accession to the agreement.

O’Connor says NZ launched trade negotiations with the UK in June 2020 and is working to achieve an ambitious, comprehensive and inclusive bilateral Free Trade Agreement.

“Both sides see a conclusion of a high quality, comprehensive and future-focused FTA as a valuable stepping-stone towards the UK joining the CPTPP,” he says.