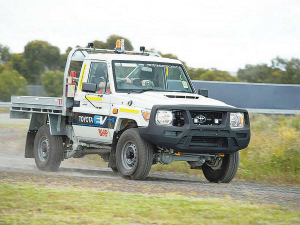 Groundswell NZ will be holding a protest against the Government's ute tax this Friday.

Groundswell NZ is organising 'A Howl of a Protest' in town centres from Gore to Kerikeri. The group says it is for "farmers, growers and ute owners who are fed up with increasing government interference in your life and business, unworkable regulations and unjustified costs". Last October, Groundswell NZ organised a tractor protest in Gore where more than 100 tractors were driven down the town's main street to protest against new winter grazing regulations.

"We want farmers to gather up a few of their neighbours and go to town in their tractors or utes. A statement will be read from Groundswell at each centre and then there will be a bark up, or a howl up, from the dogs."

He is also encouraging tradies to also join the protests because they are being penalised as well if they wanted to upgrade their utes.

Last month, the Government announced a new rebate scheme, which will make lower-carbon-emitting cars more affordable for New Zealanders and will see a fee placed on higher-emission vehicles - such as utes.

"Tradies are also being penalised - their utes are just as essential fro them as they are for farmers," McKenzie adds. "We're being penalised for living in a rural area, or for having a practical work vehicle."

Groundswell is also encouraging people taking part in the protests to have lunch in town afterwards to support local businesses.

So far, protests have been organised for Gore, Mosgiel, Oamaru, Greymouth, Blenheim, Thames, Hastings, Palmerston North and Kerikeri, Further towns could be added to the list.