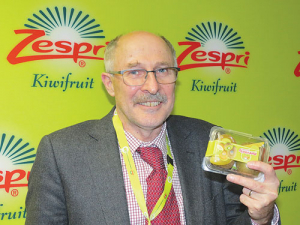 Kiwifruit is heading towards being a major force in the New Zealand economy, a Waikato University report predicts.

Most of this growth is due to the new Zespri cultivar SunGold, the report says.

The report predicts that by 2030 the industry will be producing 253 million trays of kiwifruit – a 111% increase.

Economics professor Frank Scrimgeour, who prepared the report for Zespri, says the kiwifruit sector is poised to grow massively, benefitting Northland, Bay of Plenty and the whole NZ economy. The growth spurt will be great news for Maori, he says.

Notably, growth in the kiwifruit industry doesn’t just benefit a few orchardists, but many people right across the whole supply chain, Scrimgeour says. While the growth in Northland may look modest, in fact it is very hard to get that level of growth in other industries. But for kiwifruit, many regions in NZ would be impoverished.

Scrimgeour says it’s encouraging to see Maori investing in kiwifruit because of the difference it will make in providing jobs for Maori in rural areas.

“The most important message from the study is the value of new varieties of kiwifruit themselves. These have helped in the recovery from Psa and any new varieties complement production along the supply chain and in marketing. And they provide extra resilience.

Scrimgeour says this points to excellence in science and innovation long term. This saved the industry from Psa and it’s important it continues.

Dr Bruce Campbell, of Plant and Food Research, says its plant breeding programme with Zespri is not for the faint-hearted. Every year some 100,000 seedlings go through the programme and it can take up to 20 years to finally get a variety that is commercially viable.

A lot of science goes into such a breeding programme to produce a world class food, and scientists and industry working closely together yields good results.

“There is trend internationally for science to make greater connection with people, communities and customers. The report shows a connection creating more economic value through that science, and environmental improvements and social benefits with a flow through to regional economies and Maori,” Campbell says.

RSE workers from Malaysia unable to leave their country because of a coronavirus lockdown there has led to a labour shortage for Seeka.