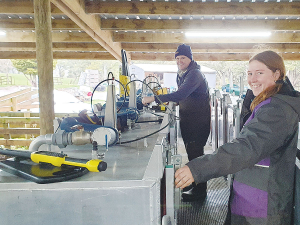 Kayleigh Forbes is the inaugural recipient of the John Reeves Memorial scholarship, awarded to a student at Lincoln doing an honours dissertation in sheep genetics.

The $2,000 scholarship has been established by the Reeves family, in honour of John Reeves, a pioneering Romney breeder who spearheaded efforts to breed for facial eczema resistance. He died after an accident on farm, still working at the age of 87, in 2019.

His son Alistair runs the family farm, Waimai Romney on the rugged Waikato west coast. He says Waimai Romney wanted to put something back into young people who were willing to follow genetics and try something different.

Forbes' research is looking at the difference between resistance to parasites, in which animals are less likely to get infected, and resilience, in which they are infected but manage to keep eating and producing liveweight - and how that affects their methane emissions.

For the study, she has been measuring methane output of rams on the Reeves farm, where the flock has been bred for resistance to the point where the ewes do not need to be drenched for worms.

"From an epidemiological perspective, resistance is more desirable because they leave less eggs on the pasture for other animals to come through and ingest," Forbes told Rural News. "But that limits their production. What I've found is that their feed intake reduces during their immune response, and also their production level drops.

"Whereas with the resilient animals when they're infected, they keep up their intake and their production, so they end up having higher liveweight gains."

However, feed intake is correlated with how much methane they produce, so it is not necessarily a good thing that resilient animals are still eating, Forbes adds.

While waiting for some data analysis before completing the project, she says the work could help produce a New Zealand-wide dataset to predict how breeding for resistance or resilience has on the overall metabolic efficiency of rams.

"We're trying to reduce emissions overall and it will give us an idea of how we're going with that."

Reeves says the scholarship was established in his father's memory because he was a man who loved and supported young people and believed in the value of academia and research.

He says that when his father and others decided to tackle facial eczema their work brought no benefit for 20 years but they perservered because they believed it was the right thing to do.

“He understood that genetics could be a panacea for a lot of problems. He was happy to pursue those things and 30-odd years later, where we are today with our sheep breeding is a real tribute to people like my father who just went off and did it.”

Reeves says the productivity of the New Zealand sheep flock over the last 15 years has seen exceptional gains, producing the same amount of meat off one-third fewer ewes, despite going onto harder country while cows have taken over the better land.

Forbes expects to submit her dissertation next month and will duly graduate with a bachelor’s degree in agricultural science, with Honours. She will then take up a position as genetics technician on a Landcorp (Pamu) farm at Reporoa.