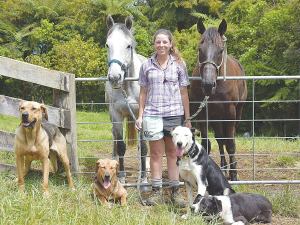 Katie Watson reckons after she comes home from a day on the farm, she feels like she has achieved something. Photo: Sue McKee.

Growing up on a lifestyle property at Otorohanga with pet lambs, calves and goats and spending time on the family farm in the school holidays has given her a great love for farming and the outdoors.

Watson's first on farm working experience came in 2011 at the age of 15. She was in year 11 at school and while her friends were getting part-time jobs in cafes and supermarkets, being quite shy she was freaked out at the thought of working with people. With the help from her livestock agent dad, Owen, she got a job with a nearby dairy farmer who taught her how to milk cows.

During her last year of school, Watson did not have a clue what she wanted to do for a career. Following a discussion with a career advisor, she chose to study an Agricultural Science degree at Lincoln University. For the next four years, she surrounded herself with like-minded people who had the same interests.

In the second year of her degree, her mum, Jo, was diagnosed with terminal cancer and given 6-12 months to live.

"It was probably the darkest time of my life," she says. "There was a point where I thought should I give up my degree and come home. But mum was very encouraging and said: 'you keep on with university and do not worry about me.' She loved farming and was an incredible woman."

During the summer breaks, Watson worked at Waitoru Station, a dry stock property at Piopio. She fell in love with the place and got on well with the people there.

Her initial thoughts were that she would not be able to farm and accepted an administration position at Te Awamutu Farm Source, where she worked for the next nine months. However, missing the outdoors and while visiting friends at Waitoru Station, she got offered the opportunity to go back and be a part of the team.

In May 2020, aged 24, the opportunity came for her to take over the lease of a 225 hectare farm at Piopio, which has been in the Watson family for five generations.

She never thought she would be on the farm so soon and thought she'd come back to the family farm after gaining more experience.

"It was terrifying and stressful at the time and there were a lot of people who doubted me. I was probably one of the biggest doubters of them all."

The farm carries 300 dairy grazers from May to May, along with Watson's own stock including 120 beefies, 650 breeding ewes and 908 lambs this year.

She knew the first year would be quite hard with lots of learning but believes she has learned a lot and is doing quite well. Being by herself, she does not have the pressure of people watching and waiting for her and is able to figure things out in her own time.

"My neighbour, Jess, is great and whenever I have any questions or if I am unsure about something on the farm, I can call her. I am also fortunate that Waitoru Station is just five minutes down the road and my old boss, Colin, checks in from time to time," Watson explains.

"A lot of people now are commenting on how well I am doing which is amazing and such a relief."

She is proud of what she is achieving and says it is very satisfying seeing the results of healthy stock doing so well.

"When I come home from a day on the farm, I feel like I have achieved something, whether it be drenching or drafting some animals, I feel like I am making a difference. Even just moving animals, I am feeding them and it is essential and important."

When Watson is not working on the farm, horse riding takes up most of her spare time. She enjoys playing squash in the winter and is Treasurer of the North King Country Young Farmers.

She says she's extremely lucky to have been given this opportunity.

"It is very difficult to find a lease farm as it is so expensive and with drystock property, it is almost impossible to own land unless it is in your family."

Watson says she was fortunate to have a great relationship with her former boss who helped get her set up and work mates, Christin and Megan who helped her find her dogs.

Unsure of what the future holds, Watson appreciates where she is currently.

“Obviously, I have skipped a few steps. Even though I am young and should have come in with more experience, I seem to be pulling it off all right and I am loving where I am at the moment.”