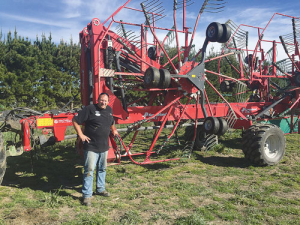 Steve Murray says the 15 metre Kverneland four rotor rake has been a boom to his contracting business.

Although he wasn’t in the market for a new rake, a demo of the Kverneland 15m, four-rotor KV 97150 rake persuaded Steve Murray, of B.A. Murray Ltd, Rangiora, him to buy it.

It is a boon to his contracting business, he says.

That wasn’t his first impression; he told his son Sam “that thing is just too big and it will take some horsepower to pull it!”

But no, a demonstration, rowing up 40ha, persuaded him to a change mind.

Says Murray, “halfway around the paddock I was impressed, with the machine picking up the grass well, forming a huge, even swath and adding the bonus of pulling in an extra 3m more grass than our 12m rakes.

“By the time we had done a lap I’d already bought the machine in my head, I was so impressed.”

Murray had already recognised the need to feed his new, high capacity forage harvesters and baler with more grass; a bigger swath was seen as the answer to slowing forward speeds and raising daily output.

“Paddocks aren’t getting any smoother, so simply relying on speed to increase outputs will result in more breakages during the season,” he said.

The same logic applies to the raking, so the KV97150’s ability to provide high volumes of grass for harvesters or balers, while still travelling at modest speeds, means less wear and tear, less damaging jolting and a more comfortable operator, despite bone- and machine-jarring pivot steer ruts.

Murray also considers the 15m rake user-friendly, with the ability to easily adjust operating widths via the independent, hydraulic adjustment of each rotor arm, from the cab on the go, to make the rake versatile. It’s not always necessary or desirable to take the maximum raking width.

And if the machine encounters obstacles such as power poles or water troughs, the operator simply withdraws or extends the rotor arm rather than raising and lowering, making operation or straightening rows easy.

As for its construction, the sealed, maintenance free Proline gearbox keeps daily maintenance down to routine greasing.

In operation, the hydraulic adjustment of ground pressure from the cab enables paddocks to be swept clean, even in undulating or rutted conditions.

Other points gathering praise include the adjustable cam track that allows adjustment of the drop point according to conditions, compact dimensions for road travel and manoeuvrability with steered wheels.