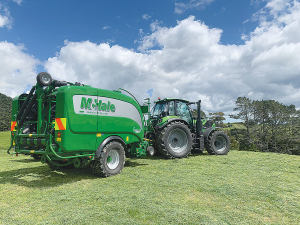 The addition of another McHale Fusion Plus fixed chamber baler/wrapper combination will lift Hilltop Harvesting’s output this season.

Contracting over a vast area from its Mangawhai base, Hilltop Harvesting’s beat covers Whangarei to the north, Silverdale to the south and everything in between.

Specialising in crop establishment and harvesting, high quality silage is produced in clamps or chopped round bales.

Having previously used a variable chamber baler and standalone wrapper system, Hilltop changed course in November 2020 with the arrival of a McHale Fusion Plus fixed chamber baler/wrapper combination.

After successfully producing around 14,500 bales last season, they have bought a second unit. Hilltop owner Wayne Preston says this should take their capacity up to 30,000 bales a year as the business develops.

Having already experienced a wet spring, he predicts that crops are likely to be thick and heavy this year.

“If the weather gods could see their way to giving us ten fine days, both machines will certainly be able to cover a lot of ground,” Preston says.

Powered by 155hp tractors, the Fusion Plus has the potential to put out a bale every minute.

“However, there is always a compromise between output and quality,” Preston explains. “We like to produce tightly packed bales weighing around 750kg, so in practice, we typically deliver around 35 to 40 bales per hour.”

Firm, well-shaped bales ensure that air is excluded from the bale, resulting in better fermentation, and bales that hold their shape in the stack, which results in few, if any, effluent issues.

“The McHale certainly has an appetite, so our favoured method is to mow with our triple set up, bring the three swathes together with an 8m rake and offer the baler a wide, flat-topped row that results in a final product with great shape and high density throughout,” Preston says.

Despite weighing around 5.8 tonnes, or around 7.0 tonnes with a bale in the chamber and one on the wrapper, the unit is well balanced, easily towed on its oversize wheel equipment and importantly, safety stopped with the standard brakes, he says.

The baler is equipped with a “film on film” wrapping system: After the bale is produced, film is applied instead of net wrap, before the wrapper element applies the final layers.

“Film on film has many advantages. Not least, it excludes more air from the bale resulting in a better end product,” Preston explains. “If there are any rips in the film after baling, we only see minimal spoilage around the puncture site and, of course, there is only one waste product to get rid of.”

He says the Fusion baler is such an easy machine to use, which is great for Hilltop Contracting as they use seasonal workers.

“We only need to spend around 10 minutes to get somebody started, then they’re away baling,” Preston adds.

He says the other key part of the package is the support delivered by Power Farming Northland.