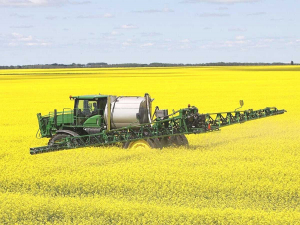 The company suggests a major issue with most conventional spraying methods for crop production is wastage, with up to 70% of conventional pesticides sprays not hitting or staying on the target crop. MagGrow has addressed this issue with a simple, two-component spraying technology that can be installed on new equipment or retrofitted on to existing sprayers.

The patented, proprietary technology passes pesticides through magnetic fields under appropriate flow conditions and changes the physical properties of the fluid to optimise the spray droplets. This delivers both superior spray drift control and crop coverage. Increased spray coverage performance can range from 36% to 100% compared to conventional spraying.

Added benefits include a reduction in water usage by up to 50%, alongside an extended spraying window. Users will typically see a return on their investment in less than a year on chemical savings alone, as well as healthier and less diseased crops due to the improved crop coverage.

Meanwhile, the increased coverage supports a reduction in labour requirements. Another key consideration for farmers is the fact there is little or no maintenance, with no moving parts, cables, or electrical wires.

Gary Wickham, co-founder and chief executive of MagGrow, says the new technology has been created and commercialised to help farmers meet their individual profitability and sustainability goals.

“New Zealand has always been on our radar as a major supplier in the agricultural food supply chain and critically, an early adopter of innovation and new technology,” he told Rural News. “We are hoping to soon install our systems onto key customer farms where we will demonstrate our award-winning technology.”

MagGrow is currently working with Trimble Ag, and other leading dealers throughout New Zealand, and is supported locally by Enterprise Ireland.