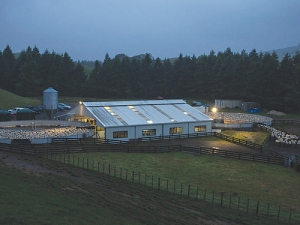 Waikino Station has been making $700,000 annually as a traditional sheep and beef operation. The new joint venture plans to start milking 4000 ewes at Waikino by spring 2017.

But despite this big forecast, Maui Milk general manager Peter Gatley told Rural News that farmers interested in converting to sheep milking should hold off until they have the template right.

He says big gains still need to be made in New Zealand's per ewe milk production.

Waikino is still part of the joint venture, but a totally separate farm and has been largely funded by Super Organic Dairy. Gatley, a former LIC genetics manager, and ex-CRV chief executive Jake Chardon have also bought into the farm.

A large area has already been turned over and is going into lucerne, plantain and clover, Gatley says. Plans for the actual conversion are in place using French rotary platforms designed specifically for milking sheep.

The progeny of an embryo programme are already on the farm and to speed things up the company brought in 4000 Coopworths to be put across East Friesian lambs. That will give it many first-cross 50% East Friesian-50% Coopworth. A subsequent generation could have 75% dairy-sheep genes.

"It is sort of like starting a dairy farm with Angus cows and basically breeding across to a dairy genetic base," Gatley says.

The company has had much interest from farmers wanting to convert, but it tells them, "let us create something you can copy".

"We would prefer to break the new ground ourselves; we are not keen to encourage people to go off on different tangents," he says.

"We think we have a good plan – a much more productive dairy sheep operation than is currently in place in NZ."

The company has learnt lessons from the existing operation and from France, Israel, Netherlands and Germany.

"We have pulled that together and designed a system we have a lot of confidence in. We want to put that in place and when it's real, when it is operating, we will ask people to take that as a template and convert at that stage. We are not asking people to go taking risks and create stuff from scratch," Gatley adds.

"If they copy what is currently in place... we think significant improvements can be made. We have the opportunity to start with a Greenfield operation; we will not replicate what we've got, we can see big improvements in production. We need much more efficiency in production per unit.

"We need to make big gains to really have a future in this, but we are quite confident we can make those gains," he said.

The 50% East Friesian produced twice as much milk as other sheep in the flock, so an improvement in dairy genes would provide significant gains.