Goodbye to the plate meter! 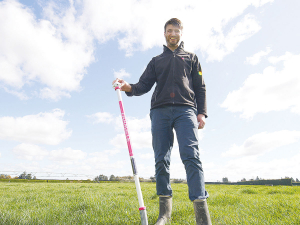 Weekly farm walks have become a thing of the past for some dairy farmers in Canterbury and their pasture growth data has never been better.

Thanks to world-first technology designed, tested and made in New Zealand, they no longer have to watch their grass grow.

That's because the Farmote System does it for them.

Real-time, objective daily pasture measurements in all conditions are now available at the tap of a phone.

There's no plate meter required, no hours spent walking the farm, no worries about getting the numbers wrong, and no guesswork.

Five years in the making, the Farmote system is the brainchild of a Christchurch design engineer who grew up in a fourth-generation farming family in South Canterbury.

Barton combined the latest advances in cube satellite imagery with remote sensors, microelectronics and weather-proof, cow-proof design to achieve what until now has been unachievable - automated in-paddock pasture monitoring.

The Farmote hardware is deceptively simple - each unit or 'mote' comprises a hollow plastic pole, topped by a sphere the size of a tennis ball, mounted year-round in the paddock.

The pole is full of solar-powered electronics and batteries; the sphere contains optical sensors used in smartphone cameras; and the prongs securing the mote to the ground include soil moisture and temperature sensors.

What makes it unique - apart from being permanently installed on-farm - is the way it automatically integrates data collected from the paddock with aerial imagery captured by low Earth orbit cube satellites.

All farmers have to do once Barton installs the system is simply log into the Farmote system website using their mobile device or PC.

Sixty motes have been tested on Canterbury dairy farms over the past three years; testing has also been done in Manawatu and Waikato.

Good pasture management, based on knowing how much grass is growing at any one time, is vital to optimising dairy herd performance, productivity and profitability, Barton says.

But getting reliable growth data has not always been easy. Existing tools and systems can be time-consuming. Results often vary depending on who does the monitoring. It's difficult to standardise data across different farms.

Even relatively new satellite-based systems are affected by cloud cover and time-lag.

Barton says the thing that really struck him in the early days of developing Farmote was that so many farmers knew the value of pasture measurement, but struggled to find time to do it.

They also worried about getting it right.

"With the best will in the world, sometimes it's just not possible to fit in a farm walk when you know you should," he adds.

Newly returned to Christchurch from the UK in 2016, already excited about then-emerging advances in remote sensing and keen  to start a new business, the successful medical design engineer saw in pasture measurement an irresistable technical challenge that needed fixing.

However, that wasn't the hard part.

"We had three huge challenges," he explains.

Barton already had some experience of the electronic challenge - devices he designed and refined for life-saving human medical and pharmaceutical use in his previous career had to be utterly reliable.

Farm animals were another matter, however.

"Our biggest problem was bored cows! They would play with our motes until they broke them. You put something in a paddock with cows, and every single one of them wants to lick it, or chew it, or rub against it."

Meantime, all the data collected on farm had to somehow be integrated with real-time satellite imagery, another major technical undertaking that took twice as long as expected to achieve.

By early 2020, all the challenges, animal and otherwise, had been resolved to the point where the Farmote system was ready for launch.

Farmers had tested it in commercial conditions; Lincoln University had contributed to the trial work; commercial and private investors both here and overseas had backed it financially, and the company was about to order its first thousand motes from a Chinese manufacturer.