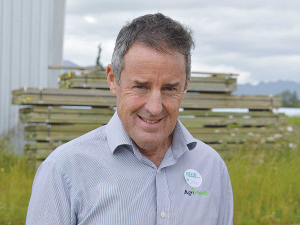 He says some farmers wrongly worry about the term contagious mastitis.

“Contagious implies that you have a cold and I am going to get it from you,” he told Rural News.

“But mastitis isn’t like that: some bacteria transfer from cow to cow during milking but if farmers have risk factors sorted, like good teat condition, the risk of new infections is low,” he says.

“We need to stop thinking that we can’t touch cow’s teats and we can’t strip cows to check for mastitis because of the risk of spreading the disease,” he says. “just keep your hands clean and don’t touch the teat end that’s all”

“Because we have this perception that it’s contagious and our interaction of contagious: that it is something bad and we are going to spread it…..that isn’t the case.” Cranefield spoke a Smaller Milk and Supply Herds (SMASH) field day at Tania White’s farm in Te Aroha.

Cranefield gave the Bells and Tania a big tick for handling SCC, produced by a cow to fight mastitis.

There are a lot of benefits in keeping SCC down in cows; production gains and lower vet costs.

“Every time you treat cows, it costs you hundreds of dollars. Financially it stacks up and production wise there is an element of pride.”

Graham Bell told the field day that it’s down to getting the basics right every time.  “There’s no secret, it’s just about doing a good job and paying close attention to detail. We love our stock and want them to be as healthy as possible so we look after them as well as we can,” he says.

“Getting the basics right through our hygiene practices, during the calving period and with our testing means we have a consistently low cell count where the milk quality is better and we have healthier cows.”

Cranefield says key things done by the Bells and Tania White is that they use set cows up well for the next season using a combination of dry cow therapy and teat sealant on cows.

“Right from day one they are focused on mastitis. They are collecting cows in calves twice a day, so freshly calved cows are getting milked straight away.”