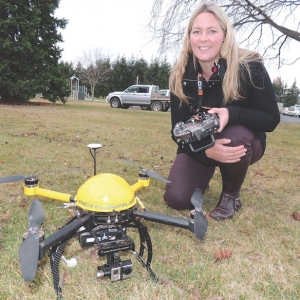 The event, in Alexandra earlier this month, featured parallel presentations from a string of companies and organisations with products, services, and – in the case of Otago Regional Council – regulations, which are set to change the way we farm.

“I’ve been pleasantly surprised by the turnout,” BLNZ central South Island extension manager Aaron Meikle told Rural News. “Both seminars have been busy all day. I’d suggest there’s been well over a 100 people come through during the day.”

A breakout area of trade displays allowed visitors to quiz exhibitors and presenters one-to-one outside the seminar sessions.

At a basic level, the systems provide traceability of applications but the real production gains come by varying inputs to match environmental limitations such as topography and soil characteristics.

“There are systems available now that allow you to put different amounts of fertiliser on different parts of a paddock or block depending on the slope and contour.”

With a combination of common sense and targeted soil sampling a map of the farm can be compiled online showing what rates of which fertilisers need to go where. The fertiliser contractor downloads that into his machine, be it truck, helicopter or aeroplane, and it automatically adjusts rates as it traverses the country.

“You can get 30% more grass from the same amount of fertiliser, and the added benefit is you’re only applying enough fertiliser to match need. You do it for productivity gains and cost savings but you actually get an improved environment as a consequence.”

As a general rule, stock camps won’t require any fertiliser, gentle slopes that are grazed and get manure deposited will require maintenance applications, while steep country that gets regularly grazed but receives no dung or urine will need double the dressing. “Until now most hill country farmers have put the same rate across the lot.”

The afternoon opened with a drone demonstration by AbacusBio using a Bott belonging to Southland farmers’ son Mark Gardyne, who’s making a business out of flying the Bott over farms and other infrastructure which needs checking.

Gardyne’s dad, Neil, explained that on his farm using the drone to monitor stock, water troughs and other things has cut four-wheeler use 20%, not to mention the benefit of getting onto problems sooner.

AbacusBio is working with the Bott in a Beef + Lamb New Zealand demonstration farm project with the goal of using the images it generates – live feed or recorded to computer for future use – to count stock.

Gardyne believes that’s just around the corner, but another objective, drymatter assessments from the air, is probably still two or three years away.

In contrast, variable rate irrigation has been available for several years now, making for more efficient management of soil water, and as a consequence, nutrients, as Precision Irrigation, AgriOptics and Hydroservices explained.

Also in the nutrient management space Otago Regional Council’s Bruce Monaghan followed up a presentation on Overseer by outlining what the council’s Plan Variation 6A will mean for farmers in the region.

“By 2020 all properties will need to make sure they are meeting these [nutrient loss] levels,” he said of the three nitrogen loss tiers ORC has set: 30kgN/ha for most of the region; 20kgN/ha in certain sensitive catchments and 15kgN/ha around the main lakes.

Other presentations covered the two fertiliser cooperatives’ farm mapping and recording systems: Smartmaps in the case of Ravensdown and AgHub from Ballance Agrinutrients. Canterbury-based VantagePoint Solutions, Farmax and iAgri were also talking about the latest farm management software, as were MYOB and ICL Chartered Accountants, but from a farm accounting perspective.

The farm management packages with meat company involvement – Farm IQ (Silver Fern Farms) and Alliance’s Hoofprint – were also on the agenda, as were BLNZ’s own benchmarking services.

Meikle told Rural News he believes use of the various technologies is reaching a “tipping point” with improving internet connections and increasing smartphone use facilitating uptake. Environmental regulations rolling out around the regions are another driver, particularly for mapping systems, he added.