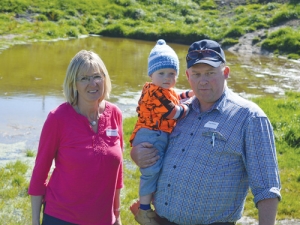 The science behind wetlands is well understood: protecting, restoring and creating wetlands onfarm can help reduce nutrient losses and improve downstream water quality. However, how to restore and develop them on individual farms in cost-effective ways is not well tested.

With this in mind, a two-year project has been launched in South Waikato: a 1.1ha wetland has been created on the 267ha Baldwin dairy farm at Litchfield.

Over the next two years the Baldwin farm wetland project will be showcased: water flow and water quality will be measured regularly and practical advice on design, construction and operation will be compiled.

According to DairyNZ, wetlands offer a lot of potential to reduce nutrient losses from farms to surface water. Well-constructed wetlands can extract up to 75% of the nitrate from runoff through bacteria and uptake by plants, trap sediment and phosphorous, reduce faecal bacteria loads and sustain important ecological values.

Protecting, restoring and creating wetlands on farm can therefore help reduce nutrient losses and improve downstream water quality, DairyNZ says. "While the science behind the wetland design and functioning is well understood, the means to restore and construct wetlands on individual farms in cost-effective ways is not well tested. "

Many factors influence how wetlands perform and construction can be expensive.

DairyNZ says the project is aimed at increasing wetlands on farms nationwide.

Outgoing DairyNZ chairman John Luxton told guests at the launch that wetlands remain unique features of the New Zealand landscape. Several decades ago people were draining wetlands but are now restoring them, he says. Landowners with significant wetlands should consider protecting and restoring them as important natural habitats.

Wetlands slow and filter water flowing off the land. In times of flood, water is absorbed by wetlands and is slowly released again in summer, helping maintain flow in waterways, which is good for surface water takes and stream life.

Luxton thanked the Baldwin family for showing leadership and donating the land for the project.

Gray Baldwin says he hopes the project will help other farmers to tackle nitrate leaching by building wetlands.

The Baldwin family has donated the 1.1ha land to QE2 Trust, and public money is funding the project. They also planted trees around the edges and paid for fencing.

Baldwin agrees that reducing nitrate on each farm will require different solutions. However, he hopes creating wetlands will cost less than building feedpads or housing for cows to control leaching -- and the project should prove that.

With councils about to impose tighter rules on nutrient leaching, farmers will either have to de-stock or spend on facilities onfarm.

The Baldwin farm wetlands break up into six bays, each connected by a weir.

An Opus spokesman, Roger Macgibbon, told the launch that in the 1990s NIWA tried unsuccessfully to promote the science of wetlands as a means for farmers to manage their environments. But the prevailing attitude to environmental management didn't further this and a lack of evidence on how the science worked stymied NIWA's efforts.

"This project is about learning a heck of lot of things about wetlands on farm. Until we learn and extrapolate from this farm and take it to the next one and do it right we not going to put science into good practice on the ground."

Barry Quayle has been voted in as the new chair of Waikato Regional Council, after a majority of councillors backed the removal of Tamahere dairy farmer Russ Rimmington from the top spot in a meeting held yesterday.