Yank tank makes it hard to go back 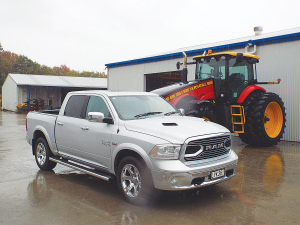 Once you go large it’s hard to go back to regular, goes the old saying.

Like the time this reviewer recently spent with a RAM 1500 truck, then a week later he was back in a humble ute.

Starting out as a ‘left hooker’ in the US of A, the RAM comes to Aotearoa New Zealand via a plant in Melbourne where it is re-engineered to right hand drive. This isn’t just a ‘conversion’, but engineering that conforms to original factory standards.

Our ride was the 1500 Laramie Crew Cab, identified by its deep chrome bumpers, large sunroof, cavernous cabin with five adult seats and a rear tub 1.7m long and 1.3m between the wheel arches.

You climb up into the cabin on standard side-steps. Inside, the pilot’s seat and all other upholstery is swathed in high grade leather with quality stitched accents.

Twin gloveboxes, a cavernous centre bin and many cubbyholes offer a place for all your stuff. If coffee is your thing notice the swag of cupholders. And if you need to work, the rear seat squabs lift and in-fill panels drop, to form a full width platform behind the front seats. Start up is via push-button, working with keyless entry, causing the glorious 5.7L V8 Hemi engine to growl into life. It has 395hp and 556Nm of torque. Hear that ‘V8 growl’, then a slick twist of the rotary drive selector gets things on the move.

The 8-speed transmission slips through the ratios effortlessly, while steering wheel mounted buttons allow manual selection. But why bother? Just let the vehicle do its ‘thang’.

NZ spec vehicles get a 3.92 ratio final drive, meaning the big RAM is no slouch on the road, making the 0 to 100km/h dash in a tad under seven seconds.

On the road, the truck’s bulk is no problem, aided by its commanding driving position and lots of respect from other road users.

The ladder chassis and rear coils should have some effect on handling. But even given a run of wet windy days in Waikato (unless you were stupid) the 1500 handled with aplomb -- better than some other high spec utes. It felt ‘planted’ and under control, helped by its hefty kerb weight.

The V8 burble easily becomes addictive, only going off song when the cylinder de-activation system cuts the motor to four cylinders when cruising.

Fuel consumption was about 12L/100km, helped by the legal maximum speed coming up at about 1050rpm.

What’s not to like? Maybe the foot operated park brake that will thwart short drivers: it needs replacing with an electronic version. And the exterior rear view mirrors need to be one third larger.

The only question now is: “Are you a Whopper man or will a Big Mac be enough?”

The Ram 2500 and 3500 utes have a name for big load-carrying and towing capability but come with a hefty price tag.