How do we the tackle the meat worker shortage? 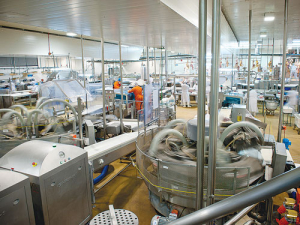 The NZ Meatworkers Union claims the answer to the labour shortage in the industry is more than just bringing in migrant workers.

The meat industry is short of about 2000 workers, a gap needing filling by much more than just signing up foreign workers.

Ask any long-term meat worker; things aren’t how they used to be.

Sure, the meat industry has always been a seasonal industry. This means that no meat worker gets year-round work and there’s always a gap in their earnings.

Meat workers used to call this their ‘holidays’ because the gap was enough to be filled by their accrued holiday pay.

But that gap has grown bigger. Wages have been steadily declining for most meat workers over the last couple of decades while productivity has increased.

The ‘living wage’ of $20.50/hour doesn’t exist for many process workers and labourers. You have to consider their precarious employment and months dependent on finding other work, or the state filling the gap with social welfare benefits.

As for holidays, who gets a paid holiday in the meat industry?

When the meat industry was deregulated in 1981, politicians and commentators encouraged closing meat plants where meat workers were readily available. It has become obvious that in the small rural towns where the meat industry predominates there would eventually be a shortage of labour. Young people are more mobile and seek better opportunities elsewhere. The skilled workforce is ageing, and the freezing works are no longer an attractive option.

Imagine this: you work in a shitty job (I mean animal faeces) with blood and heat, you’re on your feet on concrete floors for hours a day, wearing increasingly invasive protective gear. You rush to have a break, and get yelled at or punished if you are late back to the chain, the speed of which is regulated by the employer or, if you are lucky, by a union agreement.

Your pay depends on throughput, in other words how many beasts are killed on your shift: that’s called piece work.

A lot of work was done to identify what would make the industry more attractive to working people and how to avoid costly competition. That report was shelved as soon as the National Government was elected in 2008.

Instead some employers in the meat industry have resorted to downward pressure on wages. They’re relying on the old methods of resisting unionisation, challenging workers who choose to join a union, using aggressive actions such as unlawful lockouts, refusing access by union officials and targeting union activists in layoffs and return to work.

I’m not saying the whole industry is like this; it’s not. We have good relationships with most of the industry, but it is time for them to step up. It’s not good enough for their industry association to be moaning about the shortage of workers, when they have largely stood by and allowed one of the top five meat companies to impoverish and de-unionise workers.

There is another solution: we reconvene the industry three-party group. We work together to find short- and longer-term solutions not only to labour shortages, but also to the challenge of making this industry attractive once again to working people. We figure out how seasonal work can be real work; and there are options.

The challenge for the meat industry is that the companies be prepared to listen.