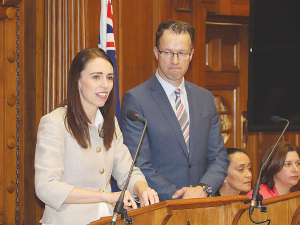 But is everyone absolutely happy? The Government has inserted into the legislation a clause that says if the sector doesn’t do what it wants it will use this to drag the sector kicking and maybe screaming into the ETS. The Government is putting the acid on the ag sector.

The environmental group EDS says farmers need to perform and is quite sceptical of the arrangement. Greenpeace was typically cataclysmic and hysterical, labelling the Government as “sell-outs”.

Meanwhile, DairyNZ’s Tim Mackle doesn’t think the Government ‘backstop’ (an unfortunate choice of word) is necessary. What the backstop signals is that for all the rhetoric about a good deal, the Government fundamentally doesn’t trust the ag sector. If it did trust it why put it in?

The word ‘backstop’ is simply another word for ‘threat’. One senses that it is also the Government appealing to green voters and telling them ‘we will control farmers – don’t worry’. Yes, folks the election campaign has begun and the agri sector will likely be caught up in the scramble for votes.

All the flag waving and lovey-dovey rhetoric at Parliament the other day is nice, and hopefully it will work out. But this deal has the appearance of an arranged marriage, rather than one born out of unrequited love. Yes, farmers and horticulturalists have managed to get time to sort out their ag emissions. However the ‘backstop’ deadline built into the deal will unlikely do much to lift morale in the sector.

Ahead of it are water, land use and biodiversity issues that are still unresolved. Hopefully the farm sector groups – Beef + Lamb NZ, DairyNZ, Fed Farmers, Hort NZ and all – which have done a good job on agricultural emissions can make similar progress with the Government and bureaucrats on these thorny issues.

So despite all the spin, uncertainty and a lack of confidence remain in the agriculture sector.

DairyNZ say the government needs to rethink how environmental research is funded in New Zealand.