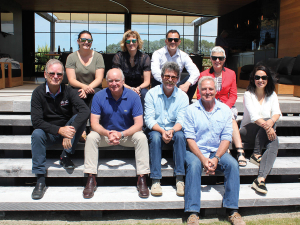 Leadership and Communities Manager, Nicky Grandorge was recently invited to the first ever International Women in Wine Conference, held in Milan. She attended the November conference with winemaker and Chair of Women in Wine, Kate Radburnd.

“It is due to the success of our Women in Wine programme that we have received international recognition,” Grandorge said prior to heading to Italy. “It will be a great opportunity to learn what other countries are doing, and I am also proud of what we have achieved. For example the mentoring programme we have established, as I don’t think many other countries have this. They are all quite keen to hear more about that.”

The international conference included speakers from Spain, Italy, US, UK and Australia. Grandorge and Radburnd were asked to present a 10-minute summary of what the New Zealand programme was about and its achievements.

They would have had a lot to fit into that 10 minutes given the solid steps taken since the programme began in 2017. With a theme of Connect, Inform and Change, Grandorge says each pivotal point has shown success.

“Connect is the networking groups that have been established in nearly every region around the country. Many feel they have really benefited from these groups and gained in confidence through a sense of belonging and being able to bounce ideas around in a supportive the inform. Various workshops have also supported the inform and I think the change is now beginning. People are naturally talking more about women in wine, it’s on people’s radar.”

The mentoring programme has been a standout success for Women in Wine, with close to 20 mentors and mentees working together to increase confidence among females working in the wine industry. So much so that NZW have established a second mentoring programme, that is open to both men and women.

“It will be a separate programme. The Women in Wine programme will continue, because we have found that some people find it more valuable to be in a woman on woman environment,” Grandorge says.

“But at the same time there was a call from men wanting a programme as well. So we have instigated a second programme which we will run each year.”

Both male and female mentors and mentees can apply to take part in the programme, which will have a similar format to the original Women in Wine one. Individuals can apply on line, the successful candidates will be selected by a panel, with finalists being contacted for a short phone interview prior to matching. Grandorge says both the selected mentors and mentees will then take part in a training session. Previously only mentors were offered this.

“But we are introducing one for the mentees as well. The reason is, it manages their expectations about what mentoring is all about. And it provides another important networking environment. “We know how valuable networking is. We’ve seen from other initiatives such as Young Winemaker and Young Viticulturist how friendships and communities have grown. It’s another great way of strengthening the future of the industry.”

Grandorge was keen to point out that the mentoring programmes are not just for younger members of the wine industry, and also not just for winemakers or viticulturists.

“It is for everyone working in the industry, for all roles. We are keen for people that are in sales and marketing, operations, general management to be involved as well.

“And it is for all ages, the mentees don’t have to be young. There are a lot of people mid-career who have a bit of a dip in confidence and are looking for a new direction for the second phase of their career. I think it is important that there is no age restriction.”

When the Women in Wine initiative was established, one of the major objectives was to establish statistical information regarding women’s positions within the wine industry. Grandorge says an Our People survey run earlier this year with results recently released has provided the all-important information that has been lacking up until now.

Initially aiming to identify women’s and men’s roles in the wine industry, the survey was expanded to look at diversity issues as well.

“So now we have some very good stats that show what roles men and women are working in and at what level, such as senior, managerial and other roles. It also covers areas such as age groups and ethnicity within the workforce.

“This is a big achievement for Women in Wine to get this off the ground, because now we have a benchmark to work against.”
She says the plan is to repeat the survey every three years, so concrete evidence on change can be viewed.

All this achievement within two and a half years. Very much a success story.