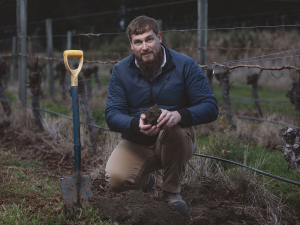 Pernod Ricard Winemakers New Zealand Sustainability Manager Tracey Marshall says the project is a chance for the viticulture team to explore knowledge in regenerative techniques, trial an abundance of cover crop species, build better “soil balance”, and measure the impact on vineyard health. “If you get the soils really active and healthy, there is evidence that the plants will be more resilient as well.”

The site is part of a 60ha vineyard flagged for regenerative viticulture, sitting between one of the company’s large organic blocks and the 9ha Kaituna Wetland, which is a showcase of Pernod’s environmental initiatives. This winter it will be direct drilled in an elaborate seed mix, devised by the company’s viticulturists and Marlborough cover crop experts Kiwi Seeds. That includes more than 20 different species, all with a specific role to play, from aerating the soil with a tap root, to covering its surface with foliage.

“It’s basically focused on building the soil fungal bacterial balance, which makes nutrients available,” Tracey says. “It allows the plants themselves to become more resilient.” Soil monitoring from here on in will assess the bacteria and fungi balance and activity of the trial block, alongside carbon content changes.

She’s speaking right after attending a seminar on Regenerative Agriculture in Blenheim, where more than 70 people – mostly from the wine industry – gathered to hear natural performance regenerative coach Jono Frew and regenerative farmer Peter Barrett talk of the outcomes of work at Linnburn Station in Central Otago. “It made me really, really excited about our plans,” Tracey says.

Matt Murray, who is Pernod Ricard Winemakers New Zealand Site Manager, Wairau, says there’s a growing wealth of information on regenerative agriculture in other sectors, such as pastoral farming,
but little in viticulture. “There are a lot of things that won’t adapt directly from animal systems, so there’s quite a lot we can do here and be innovative with.”

“Nurturing terroir” is one of the four pillars of Pernod Ricard’s global Sustainability and Responsibility Roadmap, which is aligned with the United Nations Sustainable Development Goals. The pillars include a focus on regenerative agriculture and biodiversity, “terroir mapping”, and reducing carbon intensity by 50 percent by 2030. All Pernod Ricard Winemakers’ company-owned vineyards – in four wine regions around the world – will develop regenerative agriculture pilot schemes by 2025, before partnering with farmers to share the information.

For Tracey, it is the latest in a long list of sustainability targets she and others in the New Zealand operations have been able to get their teeth into, from vastly reducing waste streams from the vineyards and wineries, to restoring and replanting the Kaituna Wetland, which has just been put under a QEII National Trust covenant. Over the past decade, Pernod Ricard Winemakers New Zealand has planted inter-row crops and, trialled swathes of wildflowers at its vineyards, and extended its organic operations, which now total more than 90ha around New Zealand. In 2016, Tracey instigated an ecology survey to benchmark the health of vineyard soils and waterways.

The company has also given major support to the Marlborough Falcon Conservation Trust over the past 10 years, and has undertaken native planting projects around unused vineyard areas and waterways, creating corridors for native birds and insects and boosting biodiversity for their vineyards.

“As New Zealanders we like innovate and be early adopters of positive change”, Tracey says of the company’s dizzying multitude of sustainability initiatives, awards, and certifications, including the recent certification of 100 percent renewable electricity through Meridian (see sidebox). “We like to be at the forefront of sustainable practices.”

And she counts herself lucky that Pernod Ricard’s global reach and perspective ensures sufficient resources and knowledge to target science-based goals that align with international best practice. “We can really target initiatives that will make a difference. It is not just a random ‘let’s do this, let’s do that’; it is well thought through, in terms of what we will put in place in order to meet our goals.”

Even minor steps can reap major rewards when it comes to improving the environmental footprint of the wine industry, says Tracey. “Lots of changes – usually small ones – combine to lead to lesser impacts. They can be quite powerful.”