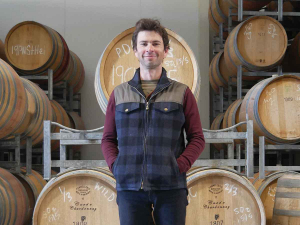 “Everything about this place is variable,” says the Waipara company’s Winemaker. “The people who work here, the varieties, and the soil in particular.”

Now he’s considering the evolution of their model, as Covid-19 crashes down on the restaurant trade they’ve relied on. “I believe the biggest impact on us is coming,” Paul says. “It will play out very slowly and we are going to have to adapt and engage with the local community.” He sees a “huge opportunity” in the growing appetite for Farmers’ Markets and local connection, and the Boneline team hope to lure more people for rich cellar door experiences, while perhaps “thinking outside of just wine”, to grow the likes of citrus.

The Boneline sits on the south bank of the Waipara River and is owned by Paul Tutton and Olga Sienko-Tutton, who live in the UK, and Vic Tutton and Lindsay Hill, who live on the vineyard. They began planting 30 years ago, fetching cuttings from growers in the valley and around the country, “so we have a fruit salad of clones”, says Paul. Planting took more than a decade, with some vines on their own roots while others are grafted, adding to the complexity of the operation.

Their brand is named for the nearby exposed K-T Boundary line, a geological signature that marks the end of the Mesozoic Era and extinction of the dinosaurs, and for the fossils found in the Waipara River, dating as far back as 65 million years. There are moa bones here too, relative newcomers, and the geological legacy of a glacier, and of terraces chiselled out by the river.

That combination gives the property its contrasting soil profiles, says Paul, talking of swift transitions from silty soils to “bone of your arse gravel with no loam in it at all”. Vines are managed according to clone, soil and wines, and hand harvested clonally and carefully, to be processed individually in the winery. “We are only a small producer, but like to make as much work as possible,” says Paul, who joined the company as Assistant Winemaker in 2015.

Since then Boneline has converted to organics, with certification due next year, and reduced inputs in the winery, with a philosophy of “minimal intervention with maximum care”. Tank and barrel fermentations run alongside small lots of hand plunged Pinot Noir, Cabernet Sauvignon, Cabernet Franc, Merlot and Syrah, and successive vintages show stylistic development, “guided by the seasons and the progress in bottle of our wines from previous vintages”, says Paul. Nothing remains static, he adds. “There’s a lot of evolution in the way we approach winemaking and growing grapes.”

Boneline’s 2020 harvest rolled out two weeks earlier than typical, with a gentle “grazing” of the vineyard. They’d been bitten by both hail and bronze beetle in early November, resulting in “some pretty good haircuts on the vines”. But with great flowering and good fruit set, and “the weather playing ball completely”, it is a “stand out” season, says Paul. “It’s one of those years where I think it’s a beautiful balance of crop loads, with excellent quality across all of our varieties.”

Acids were lower than usual leading into harvest, thanks to warmer nights, and they didn’t have to wait for lower malic, at the price of higher brix. Once they had started, the harvest rolled through neatly, with a two-week gap between the early and late parcels for each variety, except for Pinot Noir, which stretched out over three weeks. Paul makes two Pinots off the same block, at an equal tier, but stylistically quite different, and developed from year to year. The Wai-iti Pinot, from various Dijon clones, ripens earlier and Paul aimed for 13.5 percent alcohol this year, while the 10/5 “gumboot” clone provides the base of the Waimanu Pinot, “which I had in my head at 14 to 14.5 percent alcohol,” he says. “You plan this stuff in your head, and you know it’s a good season if you can follow through.”

The company was three or four days into picking when the country went into Alert Level 3, followed swiftly by Level 4, “so the wheels were in motion”, says Paul. They picked just 55 tonnes, “so definitely in the little category”, with a small team of local pickers and strict safety measures. “The Government did such a good thing in getting onto it early enough. If the virus had gotten much worse then it would have been a much more personal decision for each of us going to work,” he says. “We still felt safe.” The advice from New Zealand Winegrowers was also “excellent”, he adds. “It was great to be told what to do. We feel very fortunate and I think everyone played ball.”

Looking to the future, Paul believes the small size and “fluid” nature of Boneline will stand them in good stead as the Covid repercussions reveal themselves. “We will see what happens and react and try and evolve to what comes.” 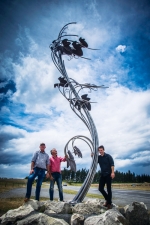