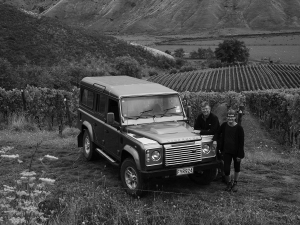 Richard Brimer worked his first vintage to save money for a camera, having left school at 15 to do a photography apprenticeship.

That Hawke’s Bay harvest at Vidal – working alongside fellow cellar hand Tony Bish - was to set the path of his career, including 35 vintages behind the lens and four wine photography books. “Basically, that’s why I started shooting the wine industry,” he says.

For vintage 2021, Richard revisited his 1992 vintage tour, travelling from the northernmost vineyards of the North Island to the southernmost of the South, in order to capture the people, places, vines and wines emerging from the year. The times have changed – “back in the day there were people picking in jandals in the vineyard – you’d never see that now”, he says. So has the transportation, with Richard’s 2021 Vintage Tour sponsored by Land Rover, which provided a gleaming Defender for his journey.

The tour started on 15 January at The Landing in the Bay of Islands, but was sidetracked a few times because of Covid-19 scares in Northland and then Auckland, says Richard. His journey was also complicated by the speed of the vintage, as he moved swiftly to keep up with the early start and end of the harvest. “It ripened very quickly.”

With a “mobile glamping unit” attached to the Land Rover, Richard stayed in style on vineyards, while meeting wine folk around the country. The photo tour naturally included Tony Bish, now of Tony Bish Wines in Hawke’s Bay, as well as other friends he’s made in the industry over the past 35 years. “For me it’s more about the people who are in the industry, as opposed to the business,” he says. “Some of the shots are with people at home having dinner, as well as in the vineyard and the winery. I wanted to show the human side of winemaking, not just the picking in the vineyard or plunging or pump overs. That’s what really interests me.”

The result - Road Trip - will be a lightly captioned photo book with an essay describing the trip. “It’s quite a personal journey revisiting something I did in the early ‘90s in an industry I really love.”