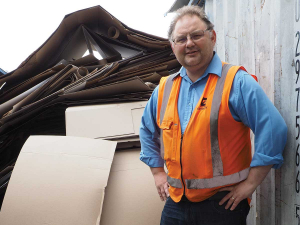 Making sustainability simple has been key to the success of WineWorks’ plummeting waste-line. “It really is about changing the way people think and building a habit,” says the company’s Project Manager, Anthony Barnes. “You have to make it easy for people to do the right thing.”

The Marlborough-based wine bottling and warehousing company has doubled its case numbers since 2015, but reduced its waste to landfill by nearly 10 percent over the same period. Ninety percent of its waste, by volume, is now captured for reuse or recycling, and suppliers are increasingly vetted for sustainable products and packaging, says Anthony, who is far from satisfied by their success. “I am not happy with the level we are at,” he says. “If one piece goes into the landfill skip that doesn’t need to, I will pick it up and give everyone a rark up for it.”

WineWorks has now signed up with Toitū Envirocare, and has undertaken an initial first audit under the scheme’s carbonreduce programme. They have “some fairly lofty goals” planned, says Anthony. “We are certainly not taking an easy-does-it approach.” The company plans to be carbon neutral by 2030, and he expects it to be zero waste in the same timeframe.

Anthony and his wife Beth left Auckland’s “rat race” in 2008 to move to Marlborough, where he had first lived 14 years earlier, straight out of high school and learning his logistics trade while serving in the Air Force at Woodbourne. In the eight years between leaving Blenheim and returning to become WineWorks’ Warehouse and Distribution Manager, the expansion of New Zealand’s wine industry had been “pretty staggering” he says. “It wasn’t quite the wild west, but it was certainly a very young wine industry in dynamic phases of growth, for good or for bad.”

The industry was scrambling to keep up with expansion, but in the years since, he has witnessed it move from that “youthful” position to being an established sector, with a lot of experience, skill and understanding in the ranks. That’s come with a change of mindset, he says, noting that a decade ago people would be employed for a logistics roles because they could tell a Sauvignon from a Chardonnay grape, rather than the professional knowledge they really needed. Now there’s a similar evolution happening around sustainability, in wine and other industries, as they better understand the opportunities to work in a more efficient and environmentally conscious way, Anthony says. “It’s exciting to think that we will be past those growing pains soon.”

In 2012, Anthony became Supply Chain Development Manager at WineWorks, then moved into the Project Manager role, focussing on infrastructure development, while looking after the company’s sustainability programmes, alongside WineWorks’ Auckland-based Operations Improvement Manager Gowan Robertson, “as well as the wider team”. He’s seen a maturing outlook in the wine industry on many levels, including logistics, over the past 10 years, “and I believe that is what we now need to see happen around sustainability”.

A more sustainable focus is simply part of the company culture now, says WineWorks Director Tim Nowell-Usticke, a member of the New Zealand Winegrowers’ Board. “It is not an addition to what we do. It is how we do things.”

Building habits starts with getting the basics right, says Anthony. If somebody has to walk across the room to a recycling bin, while a rubbish bin is right next to them, “whatever is in their hand will go to landfill”, he says. With that in mind, WineWorks has built better opportunities for success, from the offices to the bottling line. “It’s all about making sure the systems and procedures are in place… And making it easy with things like colour coding,” he says. All by-products or waste products that can be recycled or reused are, including paper, glass, plastic, wood, polystyrene, aluminium, and steel. “Whatever is in the facility that we don’t want, we are getting 90 percent of it, plus, into a recycling channel.”

Tonnes of plastic are sent away each month to be reprocessed, pallets are sent back to the likes of Chandler Glass for reuse, and cardboard is also sent to reprocessors, Anthony says, noting that with a few skips of cardboard each day, sending it to landfill would be “diabolical”.

The focus from here on is to reduce what is coming in, he says. “We look at something and think, ‘how is it packaged?’” The company’s purchasing requirements are moving to insisting on recyclable packaging, and also look into the environmental practices behind the products and packaging they receive, including energy efficiency. WineWorks’ forklifts, for example, come from facilities that are zero waste to landfill. “Diving deeper into that is our focus now,” Anthony says. “We have not done it as well as we could have and should have. This is the next step of how we can improve ourselves.”

WineWorks is also part of (“and champions”) the Sustainability Guardians programme run by Sustainable Winegrowers New Zealand (SWNZ), through which industry members collaborate to tackle environmental challenges and opportunities.

Anthony says wine companies they work with have varying levels of interest in WineWorks’ sustainability initiatives, with some keen to do a deep dive to analyse accreditation and data, while others just desire an overview. “But wherever it can add value to the industry, by sharing insights into successful initiatives, it does,” says Anthony. “We want to help our customers to succeed too… If there’s a piece of knowledge we have, then we’ll share it with them.”

And when it comes to the people of WineWorks, he hopes these days they don’t even need to think before doing the right thing for the environment. “It’s just the way we do things.