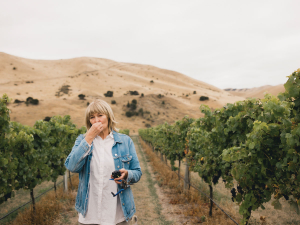 "I come with bruises, and I have learned so much from my bruises", says the co-founder of Kim Crawford Wines and Loveblock, recalling some emotionally "brutal" moments, amid plenty of "fabulous" ones.

Together they led her to a vineyard poised on the rolling golden hills of Marlborough's Awatere Valley, where she is playing by her own rules. "Loveblock is my project," says Erica. "It's really a privilege to live your values and make a change."

Those values - found in the organic and permaculture practices of the farm, and in its exploration of natural preservatives - came from bruises as well, albeit more literal than emotional. In 2002, while working with Kim Crawford wine, Erica was involved in a car accident that damaged her a little but enlightened her a lot. In her health check-ups after the crash, she was told she presented like a 55-year-old businessman, which kick-started a fresh take on life that included eschewing packaged and preservative-dousd products. "So, by the time we got to Loveblock, it was a natural progression."

Kim and Erica's story began at a Cape Town wine festival in 1987. She was in her early 20s and had been working as a young scientist in cardiac medicine in South Africa, but had decided she was too "distracted" by life outside the lab. "He told me that he was going to marry me, and I told him he was completely mad." But it turns out he was right, and "one thing led to another", she says.

Nearly two years later they were back living in New Zealand, where Erica worked for a diagnostics company, in the technical realm while also cutting her teeth in business. "They gave me a sales and marketing job and I learned a lot about people, how to manage a team P&L, stock control and so on. The first boss I had in New Zealand was quite instrumental in my thinking on business." Among those lessons was the fact that relationships were "paramount", she says. "I could always do people. I like people. It's an innate thing."

The skills she learned, and the relationships she could build, stood Erica in good stead in 1996n, as the couple devised an eponymous brand in their very early 30s. Kim was working at Coopers Creek and building a good reputation, and she had two babies 13 months apart, which she regards as the motivation for setting up Kim Crawford Wines from their family home.

With a budget of $20,000, the couple dipped into the unknown, with a virtual model that made wine without owning land or winery. It was perfect timing, with New Zealand upping the ante on wine exports, while a generation of wine consumers emerged who might not have money to buy an elite and expensive Chardonnay, “but wouldn’t be caught dead drinking the big brands”, says Erica. “There was a spot for an urban brand with a lot of flavour.” She also happily wielded a lack of boundaries that came with being an outsider – somewhat at odds with Kiwi reserve – to get the brand noticed. “I didn’t have those natural limitations of what you can or can’t say.”

She drove Kim Crawford Wines with “maverick” tactics, such as midnight tastings that sidestepped traditional wine reviewers. The label disrupted convention and Auckland in particular lapped it up, she says. “It was this little thing that took on the establishment. It was the underdog and Aucklanders really took it to their heart.”

By 2003, the brand had grown into a strong exporter, and needed to double its 100,000 cases, “but we couldn’t capitalise on the growth”, says Erica. They sold to Canadian wine company Vincor, but stayed working within the business, building sales and exports. “It was a tremendous romp around the world,” says Erica of the Kim Crawford journey. “God, we learned a lot. And I loved every minute of it.”

In 2006 Constellation Brands bought Vincor and two years later Kim left the company, with Erica staying on a few more years in the “fabulous job” of Global Sales and Marketing Vice President, overseeing the integration of Kim Crawford and Nobilo and navigating the global financial crisis. “I learned a lot of things with my time with Constellation. It was people who made my time there,” she says.

With their first label behind them, the couple left the virtual model behind as well, and bought a beautiful farm on Marlborough’s east coast, which they started converting to organics. A non-compete period meant they couldn’t start making wine again until 2009, but they developed vineyards, grew grapes, grazed cattle, nurtured compost and hatched a plan.

Meanwhile, Erica became involved in other business, joined the New Zealand Trade and Enterprise Beachhead Advisory Board, and invested in other industries, including natural skincare. “It was a good broadening of experience,” she says.

Then in 2014 they launched Loveblock, and “every trade person wanted to link to the name Kim Crawford”, says Erica. “But it was the polar opposite of that operation. With Kim Crawford we owned nothing and there was very little provenance. Now we own all the vineyards and it’s estate designation - we only use our own fruit. So, if we grow, we have to plant some more.”

So far, they have 110 planted hectares, with expansion plans afoot. But it’s been a challenging experience on unknown country for vines, with some hill blocks pulled out because they were simply not viable, and a dilution of organic practices, thanks in part to the havoc caused by brown beetles. “It has been a long journey and a difficult time,” says Erica, who graduated from a Postgraduate Diploma in Viticulture from the Eastern Institute of Technology last year, in order to better understand her soils and what they need.

Not done with leaping boundaries yet, she is replacing her dream of growing organic beef among the vineyard (stymied by the lack of an organic slaughterhouse in the South Island) with plans for “tree farming”, to help create “corridors of biodiversity” and make the property carbon positive.

Loveblock is also deep in research into alternative preservatives and antioxidants, including a trial at the Bragato Research Winery in Blenheim. That’s an extension of the sulphite-free Loveblock TEE Sauvignon Blanc, which was launched in 2019 with very small production, as a world first using green tea as a natural wine preservative to replace sulphur dioxide. That’s been going great guns in Japan, the United Kingdom and Canada, with a launch into the United States in February, says Erica, who plans to travel for that “come hell or high water”.

They’re also working with alternative vessels, including concrete eggs and amphora, “and really embedding ourselves deeper and deeper in sustainability and regenerative farming”, she says. Meanwhile, Erica’s commitment to governance and equity means she’s constantly balancing Loveblock with her commitments beyond the label and farm. In 2016 Erica was inducted into the Business Hall of Fame for Women Entrepreneurs. She is a member of the Investment Committee for the University of Auckland Business School, and sits on the New Zealand Winegrowers (NZW) marketing committee. Erica was also a founding member of New Zealand’s Global Women and is a mentor in the NZW Women in Wine programme. “I do think we need to make more elbow room for ourselves,” says this scientist, businesswoman, viticulturist, farmer, board member and mentor.