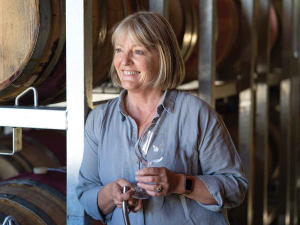 Kate Radburnd grew up in Adelaide with wine loving parents, and tasted her first New Zealand wine in 1982. It was a Montana Blenheimer, from memory, and very unimpressive, she admits. But within a matter of months Kate was working in New Zealand as a winemaker, and would grow to love cool climate wines, and to play an integral part in the formation of the New Zealand wine industry.

Kate was the only female in her graduating year at Roseworthy Agricultural College, and had no direct links to any winery, so applied for all jobs. When Villa Maria founder Sir George Fistonich visited the university, Kate was offered the job of Assistant Winemaker at Vidal in Hawke’s Bay.

The next few years were to throw curve balls at the young winemaker. First there was 1985, when a tsunami of fruit coincided with days of torrential rain, almost wiping the vintage out. Then came the Government vine pull that saw hundreds of hectares of grapes removed throughout New Zealand. Coinciding with that, Villa Maria went into receivership, although it was to recover the following year. Kate sees it all as a glass half full: “The vine pull meant that we ended up with the right varieties and the right sites. Also, with Villa Maria’s receivership, that absolutely embedded in me that we had to focus on quality. We are small and remote in New Zealand - it absolutely has to be about quality. With those experiences, I think I have been very lucky.”

After seven years with Vidal, Kate moved to CJ Pask as Head Winemaker. Within two years, she was a part owner of the Gimblett Gravels’ company, and by 1999 she was Managing Director. During her time with Pask, Kate represented Hawke’s Bay on the board of New Zealand Winegrowers (NZW) for 14 years, chaired Sustainable Winegrowing New Zealand (SWNZ) for more than five years, and was instrumental in rolling out the SWNZ programme for wineries. Integrated Winegrape Production (the forerunner of SWNZ) had begun as a pilot programme in 1995 and Pask was one of the vineyards involved. But Kate could see that more was needed. “I remember thinking that this is just crazy. If we are doing it in the vineyard, we need to be able to follow it through and show that we are doing it in the winery.”

Pask, Vidal, Palliser Estate and Martinborough Vineyards joined together to gain ISO 14001 accreditation for their wineries. “We thought it was the right thing to do and we could see further down the track that it was potentially eliminating a barrier to trade.”

The processes undertaken by the collective were eventually refined and developed into the SWNZ winery programme.

When the NZW Women in Wine Initiative was launched in 2017, Kate immediately put her hand up. She was one of the first mentors involved, and is currently the Chair of Women in Wine. In the same year, after 26 years at Pask, she ventured out to establish Radburnd Cellars in Hawke’s Bay, and is now exactly where she wants to be as a winemaker. “With this new business I am only involved in the winemaking, which I love. I am in the lab and the cellar every day and that is what I enjoy doing.”

Kate’s mantra has always been “the best wines are ahead of me”, and at Radburnd Cellars she works with small parcels from throughout Hawke’s Bay. That diversity has impacted her winemaking style, she admits. “Everything is a completely different approach. All the fruit is handpicked, chilled and hand sorted. I am not making big extracted wines - it’s all about restraint and elegance and it is exactly what I want to do; small parcels of ultra-premium wine. It has been really exhilarating.”

Maybe not quite the phrase she would use to describe the latest vintage, which was an extraordinary series of events due to the Covid-19 lockdown. “Here in Hawke’s Bay it has been so dry and we have had a vintage where the picking decisions have been based purely on ripeness and when we want to pick.” With the rest of the small team working from home, Kate was on her own in the winery, apart from a Bay View local who helped with pump overs when she wasn’t there. “It has been quite lonely,” Kate says. “On the days that we processed I could bring in up to four people to help with the hand sorting, but that was all. It is a vintage I don’t think I will ever forget.”

In terms of the future, Kate believes the marketplace will be a different beast in the months ahead, although there are some positive signs. “There is much more awareness of online sales, which people have become more engaged with. From an industry perspective, that is a positive. But there is a lot of hard work ahead. It’s like with anything, whether it’s distributor relationships or direct to your customers, it’s all about ensuring you maintain those relationships the best way you can.”

Kate has made an immense contribution in the 37 years since she tasted her first New Zealand wine, and was awarded the Sir George Fistonich medal in 2010, inducted as a Fellow of New Zealand Winegrowers five years later, and last year inducted into the New Zealand Wine Hall of Fame. But perhaps her most precious acknowledgment is the fact her daughter Penelope has followed in her footsteps, to also become a winemaker. “She very realistically understands
the hard work that is involved in this industry,” says Kate. “We are absolutely delighted.”