Women in Wine: Spring Timlin on mentorship not martyrdom 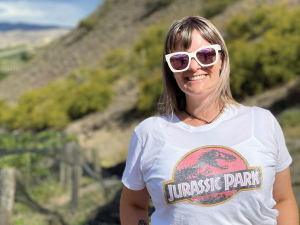 The steep trajectory of Spring Timlin's winemaking career was fuelled by mentorship at Matua, where "no question is a silly question", she says.

The winemaking team was always "open and collaborative", and Spring soaked up knowledge through daily conversations. "I learned by being a sponge - taking in as much as I could."

Now, 10 years after her first vintage job at Matua in Auckland, Treasury Wine Estate's New Zealand Winemaker, manager, Women in Wine mentor and tireless champion of the Tonnellerie de Mercurey Young Winemaker of the Year competition, gets her greatest sense of achievement from helping others grow and improve. "I have learned about myself that I get this really immense sense of pride when I see someone else achieve something; that's what I get my kicks from."

Spring was 24 years old, with degrees in sociology and fine arts, when a casual conversation in a bar revealed that winemaking could be a job. It was delightful information, and she leapt into the Graduate Diploma in Viticulture and Oenology at Lincoln University, despite not studying chemistry since she was 15. She swiftly found her feet as a cellar hand at Matua and within two years had moved to Marlborough to take on a winemaking role.

Spring is fascinated by production efficiencies and the business aspect of her role, so as her career developed and she soaked up more knowledge, she moved steadily away from the day-to-day tasks of winemaking and towards the management and business space. In 2017 she jumped at the opportunity to manage the winemaking and laboratory teams, seeing it as a chance to stretch into her area of interest while giving back to the industry. She has also been studying for a Masters of Business Administration (MBA) through Otago University, for which she's in her final year, and is able to put her studies into practice, "and to pick up different projects that will help utilise what I am learning".

Her plan is to move more into the senior management space "and be in a position where I can make some more changes". She's certainly brought in plenty over the past decade, such as driving change in the culture of winemaking, including what she sees as an unacceptable commitment. "Normalising that it doesn't have to be the be-all and end-all of who you are as a person."

Late last year, Spring was one of the speakers at a Wine Marlborough seminar on the six day vintage week, which followed on from a survey showing extreme working hours in the Marlborough wine industry. Matua has had a six-day working week for cellar hands since before Spring joined the company, and that expanded to winemakers in 2015. Now, anyone in operations doing a 12-hour shift has a day off for every six days worked. "The key point is, we want to manage our team's welfare," Spring told attendees. "We wanted to help create a work life balance for our team so that we are an attractive employer."

She hates to see a "martyrdom" expected of winemakers, who were found to regularly work 100 hours a week during vintage, "I don't think that's working hard. I think there's something wrong. That's not a pride thing - it's a problem."

Having set standards, last year's Covid-19 vintage was a huge test of Treasury's ability to care for its staff, she says. "It was a tough year, and you could see how taxing it was on each of the individuals... You could see how they were coping or not coping every day, and you had to pick up on those individual signals." Sometimes that was as simple as suggesting someone grab some fresh air, she says.

The enhanced sensitivity required through the 2020 vintage provided valubale learnings. "Everyone grew and developed from being quite open with each other in a working environment," says Spring. Treasury Wine Estates also established "multiple different options for flexible working" as a result of that period.

Spring walks the talk, working from home one day a week. "Most people would say winemakers can't work from home, but there's a way to do everything." A self-described introvert, Spring uses the day at home as a mental catchup, revive and refresh day, "so I can be really on my game", she says. "When you are a manager and an introvert, that can clash sometimes... Having that mental break is what I need to be the best for my team."

Covid-19 also impacted on Women in Wine mentoring, which Spring joined as a mentor in 2019. "They say you need to put your own oxygen mask on before helping someone else... In 2020 that was really apparent," she says. That meant occasionally asking to postpone a mentoring session, she says. "It became a two-way street."

Spring Timlin has been on the organising committee of the Tonnellerie de Mercurey Marlborough Young Winemaker of the Year since 2015, when she competed in the first ever competition. She says the event gets better every year, "and competitors get more out of it". The 2021 Tonnellerie de Mercurey Young Winemaker of the Year regional competitions are on in September, with the national final on 14 October.