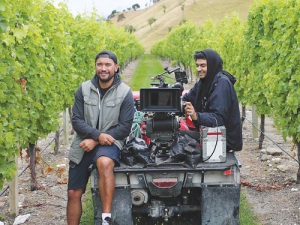 Filming in the Sleepers Vineyard in Kekerenungu.

The Sleepers Vineyard in Kekerengu is the backdrop for the movie written and directed by Casey Zilbert.

Owned by her parents Lynne and Chris Wilson, Sleepers Vineyard is one of only three in the small sub region south of Blenheim.

For Zilbert herself, it has been the chance for her to merge her two great loves – film and wine - together, in an effort to bring wine into the world of millennials.

Describing it as a millennial wine comedy, the film follows a jilted groom, who finds out a week before the big day that his fiancé no longer wants to get married.

“So he and his best two mates go down to the vineyard where the wedding was going to be held, with all the wine, and shenanigans ensue.”

With financial backing from Astrolabe Wines, (who the Wilson’s sell most of their fruit to) Hang Time was filmed early in 2017. Which in itself was an issue for all concerned, given it was just two months since the Kaikoura earthquake devastated the area.

“There were so many times this film should not have happened,” Zilbert says. “‘Firstly the November 2016 earthquakes and a severe aftershock and then they got hit by a storm. I went down after the earthquake to help, but also to check if they were still okay for me to be doing this. It was heartwarming because everyone came forward. They all said, actually we need this now more than ever. We want this to be something we can look forward to.”

Out of disaster comes triumph and in this case it proved so Zilbert explains. Because SH1 was a mess there was no tourism in the region and the group were able to film in places that normally would have been out of reach at that time of the year.

“So it was like how can we show every possible corner of what is amazing about Kekerengu so that when the road is open we can take the film out there and say; ‘hey guys everybody is still there, they are looking forward to seeing you.”’

As for the wine angle, Zilbert has more than a little interest in promoting our fifth largest export. Along with a degree in film-making, she also has a post grad degree in wine science. Although she has never used that to make wine, her background has helped her parents diversify their vineyard plantings. Along with Sauvignon Blanc, Sleepers Vineyard also grows Albarino and Tempranillo. The latter a direct result of a request to Zilbert from her father.

“I had just got a job at Shortland Street working as a script coordinator, so I suddenly was torn between two industries. My Dad, to keep me sane more than anything else, asked me to go and research what the next red variety for this region was going to be. So I went out, dug into the books and did the research and said Tempranillo is the right fit for us.”

She credits her mother Lynne with the red variety becoming such a success for the family.

“She pulled out some Savvie and planted the Tempranillo but it didn’t work very well. So she planted it in a different area. And the wine coming out of it now is amazing.

“It has taken us a few years to understand and get the best out of the vines in that particular location. But it is getting to the point that everybody who drinks it is blown away.”

She is hoping the same will be said by those who view the film when it is released next year, especially millennials.

“One of the things that came up a lot in my research is the wine industry is facing  a similar struggle as the film industry, in that they don’t know how to reach the millennial audience. They buy differently, they are a little bit unpredictable and so I hope this film is going to start a conversation between young New Zealanders and show that the wine industry is not stuffy. Instead wine in itself is fun and artistic. I want to try and take away that fuddy duddy image that wine is something that your Mum and Dad are into and get people excited about wine in the way I am excited about wine. It is such an adventure, all the way through from the vine to the bottle and into the glass.”
And yes she is hoping to have an impact in the way Sideways did a few years ago.

“I started saying it as a joke early on in the piece. But now I would love for Hang Time to do for Albariño and Tempranillo what Sideways did for Pinot Noir. Especially with younger people.”

Hang Time will have its theatrical premiere next year at a red carpet event in Blenheim, with Zilbert planning to take the movie on the road, accompanied by wines for a tasting, to towns and cities throughout New Zealand.