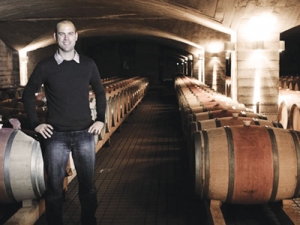 Craggy Range Winery is shrouded in misty haze on the chilly winter day that winemaker Matt Stafford has decanted some of the hottest reds he has ever made; a trio of 2013 wines labeled the Prestige Collection.

Is this the best vintage ever for red wines from Hawke’s Bay and the Wairarapa? Or just a very good one?

“The foundation for 2013 was really created by that challenging cold season of 2012; when we were laying down the canes in the vineyard for the 2013 growing season, we always knew they were going to be quite low in terms of yield potential,” said Stafford.

Low yields can equate to high quality, but it was the dream run of weather that clinched it for the grapes harvested in 2013.

“We had pretty much a dream run from December 2012 when it was extremely warm through to the consistent heat at the start of March in Hawke’s Bay. We then had a slow end to summer, so the grapes had slow maturation.”

The very warm, very dry weather in 2013 led to a drought which occurred so late in the grapes’ ripening season that vineyard health was not adversely affected, nor were the flavours of the grapes, says Stafford, because most of the ripening had taken place by that stage.

And because the days were warm but the nights remained cool, the alcohol levels did not rise excessively, while ripe fruit flavours very much did. The wines show this.

One of the top duo of Craggy Range Hawke’s Bay reds from 2013 has made it into the 2013 Annual Vintage Selection; selected from an independent blind tasting by the Australian-based Master of Wine, Andrew Caillard.

The Craggy Range Le Sol Syrah was ranked among Caillard’s top 12 of the 46 that were submitted for his quality analysis.

There are two more top quality 2013 Craggy Range reds that put this vintage’s ripest foot forward; a Pinot Noir from the company’s Te Muna Vineyard in Martinborough and a Merlot-based red from the Gimblett Gravels.

It was the Pinot Noir that most surprised this writer because there have been vintages of Craggy Range Te Muna Martinborough Pinot Noir that have had a pronounced herbal edge, which is not always a detracting feature, but can be.

“This Martinborough Pinot Noir is made with grapes grown in our favourite parts of the vineyard. What we judged to be the best blocks at Te Muna in the early years is very different to what we see them as now. Clone 114 has performed very well for us at Te Muna and we released the Block 16 in 2011, which was 100% of that. Another important component is the Abel clone,” Stafford says.

The final ‘red’ in the trio is the intensely deeply ruby-purple coloured 2013 Craggy Range Sophia; a blend with Merlot in the driver’s seat and black-as-night looking Cabernet Sauvignon and Franc with a smidgeon of Petit Verdot (just 1%) in the supporting roles. The inclusion of such a small proportion of Petit Verdot is noticeable in the blend.

It adds an inky blackness, firm smooth tannins and rich dark fruit flavours to this wine. The production of this Hawke’s Bay red was inspired by Bordeaux’ greatest right bank wines, which are Merlot-dominant blends.

The winery’s tagline for 2013 is that the stars aligned to provide warmth without excessive heat and a long season that enabled balanced ripeness, without translating to excessively high alcohol levels.