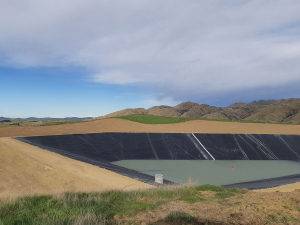 A recently constructed dam, to supply water to a vineyard in Marlborough, in the process of being filled. Photo Simcox Construction.

The summer of 2019 is not the first time Marlborough has suffered from a big dry.

There have been many others, but this year, the effect of no rain for weeks on end was perhaps more strongly felt among grape growers in the region.

When talking to winemakers and viticulturists, it became apparent that Sauvignon Blanc fruit from areas that were hardest hit by a lack of water supply, suffered. Yields were lower than in previous years, thiols were below averages expected and acidity levels were also lower.

From late December until the end of February, rainfall was a mere 12.8mm. January’s rainfall of 3.8mm was only 8 percent of the LTA. February’s of 8 mms was 16 percent of the LTA. Add to that the high temperatures and the evapotranspiration, shallow soil moisture was under pressure. In February alone, soil moisture in the 5-35cm depth at Grovetown Park was 13.9 percent, the lowest recorded for February in 17 years.

The impact of the hot summer saw river levels fall below the 8m3/s cutoff level for irrigation supply – on February 1. This is not unusual in Marlborough – there are a number of years in recent history that the consents are shut off in the month of February. However, it was the length of the shut off that was of concern to many growers.

Val Wadsworth, Marlborough District Council Environmental Scientist – Hydrology, said the shutoff continued through until March 8, with a one day respite on February 26. Five weeks in total.  The river was again shut-off for another four days in March.

There are close to 135 consents to take water from the Wairau River – the largest being the Southern Valleys Irrigation Scheme (SVIS). This scheme, commissioned in 2004, provides water to horticultural, farming and rural residential properties over an area of approximately 4,500 hectares. It’s fair to say the  majority of the 400 landowners who are members of the SVIS are using the water for grapes.

Some irrigators have groundwater consents which they were able to fall back on, when the river fell below 8m3/s.  But for many others, having  no irrigation for five weeks meant they had to truck water in to keep the vines alive. At around $13 for every cubic metre, that is a costly exercise. But only a drop in the ocean compared to losing part or all of a crop that could be worth anywhere between $20,000 and $25,000 a hectare.

Back when the SVIS was first mooted there were discussions about building a large dam to supply members, during periods of no rain. The cost at the time was seen as prohibitive, and the idea was dropped. While some growers built their own small dams or storage ponds, there are thought to only be around 20 among SVIS members.

The Marlborough District Council says there are currently 124 water storage facilities spread across the region. While 124 may sound like a lot, compare that figure with the 1060 individual vineyards in the region. It leaves a lot of vineyard blocks at the mercy of the river levels and mother nature supplying water when it is needed.

Glyn Walters, communications manager for the MDC says as far as they know, all 124 have been built for vineyard supply.

They range in size from 10,000 cubic metres to 1 million, with the average dam being between 20,000 and 70,000 cubic metres. Walters says they are spread throughout the region, in all the main grape growing areas, from the Wairau Valley, through to the Awatere and Blind River.

It was mentioned by Steve Smith MW at the recent Sauvignon Blanc Celebration, that water was likely to become a major issue for the Marlborough region.

“We cannot survive without irrigation and we need to invest in identifying and building a regional solution to securing, fit for purpose, sustainable water resources for Marlborough vineyards.” His comment was timely, given it was made on day one of the SVIS being switched off. Smith couldn’t have known that the shut off would last for five weeks, or that the impact would be so greatly felt throughout the region’s vineyards. But securing a secure water source for the future makes financial sense.

“This may seem like an overly ambitious and expensive project, but when you have more than five billion dollars invested in the vineyards of Marlborough, it proves prudent and necessary.”

I doubt there is a grower in the Wairau and Waihopai Valleys who wouldn’t agree.