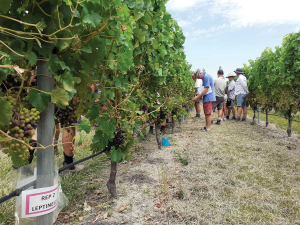 Attendees at the field day.

First stop was the under-vine and inter-row trial at Villa Maria, where Paul Robinson took attendees through the thinking behind an experiment that saw multiple native species planted under the rows, and two mixtures of cover crop treatments. They were “trying to get away from the single-species, monoculture thing”, Paul says.

Research Viticulturist Raquel Kallas said the trial, which ran through two blocks - Merlot on silt loam and Syrah on gravels - was inspired by the Greening Waipara Project (see pg 26) and the associated study through Lincoln University, which found that diversity had a positive impact in the vineyard. The South Island project found, for instance, that species like Leptinella squalida encouraged a natural predator of mealybug.

While clearly a popular initiative, the Villa Maria trials had so far failed to show any direct outcome. “The control looks much the same as the vines with cover crops,” said Raquel. She was, however, pleased that none of the treatments had been “stressful” to the vines and hoped that more funding would be secured for further trials.

With the words “you cannot address climate change without addressing biodiversity”, Xan led the group through his Bridge Pa triangle property, where he is looking to create a suitable habitat for one of his favourite creatures, the skink. Xan’s thinking, though, is in more broad environmental terms - he is actively looking to promote more personal enjoyment from the vineyard, and pushing to get safe cycling paths through his vines.

Then the ute tour went to Paritua, where work is ongoing to improve riparian plantings on the Paritua Stream, itself part of the Karamu catchment which ultimately feeds the Ngaruroro River. The emphasis here was to work on the upper catchments and then move down, said Paritua neighbour Cairn Coghill, from Sileni. Xan was keen for Hawke’s Bay Winegrowers to adopt this as an industry project.

Talking of the overall vision, he said, “if we lead on this, we get the chance to influence the rules, and that’s never a bad thing”. The biodiversity programme is run under the auspices of HBVine - a local viticultural group led by vineyard stalwarts Ian and Linda Quinn, who head up the Two Terraces vineyard in the Mangatahi sub-region.