The French potter of Central Otago 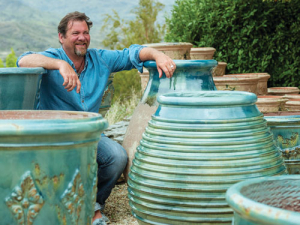 When Yannick Fourbet arrived last summer with his Kiwi wife Philippa and twin boys, Augustin and Mortimer, to start a new life in Central Otago, he brought with him no less than a container-load of beautiful Anduze pots.

He had made these at his family business, ‘Poterie Le Chene Vert’, in the south of France, now being managed by his sister.

He also brought with him centuries-old artisanal crafting techniques, and a mind full of plans to start making bespoke horticultural clays pots and “amphorae”, historically used for the fermentation and maturation of wine. The receptacles Yannick - or as he is known here, ‘The French Potter’ - plans to make will hold about 350 litres.

Wine-makers who use traditional terra cotta receptacles claim that their wine is stable by nature, rich in tannins, and doesn’t require chemical preservatives to ensure long life, or fining.

Whilst other New Zealand wineries, such as Escarpment, are experimenting and making small volumes of wine in amphorae, no-one is actually producing the pots here, says Yannick.

Creating big pots, as any potter will know, is a real challenge as not only do you need a massive kiln, but you also need a good clay source and something to retain the structure of the pot while its being moulded.   In France the clay for Yannick’s signature Anduze pots came from Spain in 20-tonne containers, so sourcing a suitable New Zealand clay will be vital to the success of the project.

Yannick developed the ancient ‘rope-coiled technique’, dating back 6000 years to the Neolithic period, with his Anduze pots.  This involves coiling rope around a wooden skeleton structure and hand-throwing clay over the rope, before smoothing it, drying and firing – the whole process taking three to four months.

Yannick plans to have his workshop up and running by early next year, and to have his first amphorae made with New Zealand clay ready by 2020.

He is seeking some three to five wineries to trial the amphorae. His wife’s Central Otago biodynamic vineyard will naturally be the first.

Domaine Rewa winemaker Pete Bartle, of Vinpro, says he’s up for the challenge, and excited to work with the Fourbets to make their first wine in amphora, likely to be a Pinot Gris.  “I think it’s a great concept, especially a New Zealand-based one, it’s the whole provenance and biodynamic story.”

“It’s the oldest way of making wine, but its completely new to modern winemaking… it will be back to the drawing board.”

Amphorae have high insulation properties and the shape promotes good fermentation dynamics. Because of the cool and prolonged fermentation, Philippa Fourbet expects the wine produced will be “lighter, fresher and fruitier.”

“It will add a different layer of sophistication and uniqueness to our Central Otago wine,” she says.

“It’s different – it’s new, but it’s not new, it’s been around thousands of years.”

Otago Polytechnic chief executive Phil Ker confirmed there was the possibility of beer-making trials using the New Zealand-made amphora at the new commercial brewery due to open soon at the Cromwell campus. “It’s all about brewing education and we’ll be doing a lot of experimentation. Where that leads to we don’t know.”

Meanwhile The French Potter will continue to import and sell Anduze vases. Developed in the 1600s and inspired by the elegant Medici vases, they were initially planted with citrus trees and only wealthy estate owners could afford them.  The Poterie Le Chene Vert vases are keenly sought after and now adorn indoor and outdoor spaces of households and public spaces around the world.

While the Anduze is special to his home town, The French Potter plans to develop his own distinctive signature New Zealand vase which will be recognisable by its shape.

“I am inspired by the challenge of designing and firing pots big and beautiful enough for the vast New Zealand landscape,” he says.