Time to put Johne’s on the map 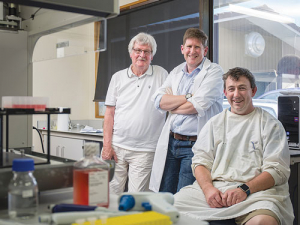 Johne's disease (JD) is a major production-limiting disease of farmed ruminants worldwide and, after CAE, it is the biggest animal health concern for goat farmers.

Sometimes called paratuberculosis, this bacterial infection caused by Mycobacterium paratuberculosis (MAP) leads to inflammation and thickening of the intestines, resulting in reduced uptake of nutrients, progressive weight loss and death. It is chronic, progressive, contagious and widespread, with no treatment and no cure.

Young kids are highly susceptible to MAP infection through ingestion of MAP bacteria in milk or from contact with teats or other surfaces contaminated with dung; dirty drinking troughs are another potential infection risk.

Once introduced, the MAP bacteria become established in the small intestine, causing it to become thickened and reducing the uptake of nutrients across the gut lining and causing the animals to slowly waste away. All the while, huge numbers of MAP bacteria are shed in the faeces into the surrounding environment to continue the infection cycle.

While there are no JD prevalence data for dairy goats in New Zealand, estimates from other industries collated from farmer surveys suggest that JD is common and widespread: 60% of deer herds, 68% of sheep flocks, 31% of beef herds and 60% of dairy cow herds harbour some Johne’s infection.

Johne’s is often described as an iceberg disease: for every clinically affected animal showing symptoms of disease, many more infected animals will be lurking just beneath the surface.

Goats are notably less likely than other species to scour (have diarrhoea) from JD so this shouldn’t be considered a reliable diagnostic indicator. More often, affected goats will exhibit weight loss and poor body condition scoring but maintain a normal appetite and faecal appearance until the disease is in the very end stages and the animal is near death. Unfortunately, these signs are common to other conditions also so the only way to know for sure is to test. For dairy goats a drop-off in milk production should also be considered an early warning sign.

Infected goats can appear healthy and live for years without any obvious outward indications whilst continuing to shed bacteria and contaminate their surroundings. Once shed onto pasture, the MAP bacteria are resilient and survive very well in damp, shaded areas for at least a year or even longer (although they can only multiply inside a host). Exposure to sunlight and dry conditions helps to kill them off.

It’s not all bad news though; for farmers with JD confirmed on the farm there is a wealth of management information available and while it is mostly directed towards dairy cows most of it is equally applicable to goat farmers.

Management revolves around identifying shedders for culling and preventing newborns from coming into contact with MAP contaminated faeces/milk/colostrum/feed/water and becoming infected when they are at their most vulnerable. Management practices can include paying careful attention to sanitation, keeping feed up off the ground where it could become contaminated with dung, keeping kidding areas as clean and dung free as possible, removing test-positive does from colostrum pools (pooled or shared colostrum is a big risk factor as MAP bacteria are shed in milk/colostrum), keeping water sources clean (particularly those used by kids), and using waterers designed to minimise faecal contamination.

Johne’s disease prevention requires good biosecurity; if you are lucky enough to be JD-free keep it that way as prevention is far preferable to control in the long run. Keep a closed herd. Failing that, test each and every replacement (but if considering animals under one year old, better to test mum) while ideally also considering whole herd test data from the originating herd if available. Johne’s disease is bought and paid for: don’t invite it home by purchasing live animals from a herd of unknown Johne’s status as, once introduced, JD spreads quickly and is extremely tough -- financially and emotionally -- to be rid of again.

MAP bacteria also survive well on muddy boots and tyres; if there’s anything good to be said about the current M.bovis saga it’s that it has made farmers take biosecurity more seriously. There is much to be learned that applies equally to other infectious diseases especially in cleaning, disinfection and sanitation.

Although a direct and causal link between MAP bacteria in dairy derived foodstuffs and Crohn’s disease remains unproven, ongoing debate in the scientific, medical and public arenas suggests it may be timely and prudent for a burgeoning dairy goat industry to take early steps to reduce the incidence of JD on farm and to qualify absence of MAP infection in herds contributing to the production of infant milk formula where competing industries may have missed the boat.

Now is the time to put Johne’s firmly on the MAP.

Two different types of Johne’s test are available: a blood/milk test and a faecal test.

The blood/milk test is the cheaper and measures antibodies in the blood produced by the animal’s immune system following exposure or infection. If blood samples have been taken for CAE testing, a Johne’s test can also be performed on the same sample.

The faecal test (sometimes called a PCR test) works quite differently and directly measures MAP bacteria being shed; it confirms that disease is actually happening and also quantifies the shedding level.

The specificity of the faecal test is considered to be 100% (this means little chance of a false positive), so when you need to be certain before culling, as is often the case for goat farmers, this can be your best option. Faecal testing can also be done on pooled samples which saves a lot of cost, and on vaccinated animals which would otherwise test positive using blood or milk.

Talk to your vet about the best testing approach for your own situation as it can change depending on whether you are testing for freedom from disease or for management and control.

Neither test will work perfectly in the very early stages of infection, before antibodies are produced or bacteria shed consistently, but as the disease progresses the test performances improve greatly. Infected kids typically won’t test positive until the infection has begun to take hold so it is not recommended to test very young animals; the best age to test is about 2-4 years of age.

There is no treatment for JD and there is no cure, but the ongoing removal of high shedders can quickly mitigate its effects on farm. We don’t talk about eradicating JD, we talk about managing it out of the herd until it’s no longer a problem.

Garrick Batten on why there aren't more goats on pastoral farms.