A family affair for prize-winning cheesemakers 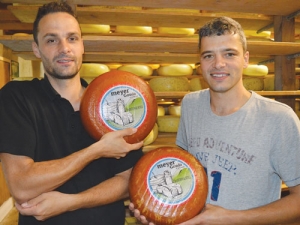 Geert Meyer (left) and Miel Meyer with their award-winning cheese.

To describe the Meyer cheese business as a family affair would be an understatement.

On a 150ha farm 12km west of Hamilton the Meyer family have been churning out award-winning Meyer cheeses for at least 25 years.

Founders Ben and Fieke Meyer are retired and live on the farm, now run by daughter Sophia and her husband Bert; they milk 415 cross-bred cows. Elder son Geert is the cheesemaker while younger son Miel is the general manager of the cheese business.

The cows are milked every morning and the milk is immediately piped 20m to the cheese plant. Here it is pasteurised before being processed into cheese by the afternoon. Most cheeses are ready for eating within four weeks, while vintage Meyer Gouda can take up to three years to age.

The Meyer children spent their childhood in the Netherlands immersed in cheesemaking alongside their parents, who brought their cheese-making traditions to New Zealand in 1984.

The company also took home three gold medals in the flavoured cheeses category for its Smoked Gouda, Cracked Pepper, and Italian Herb cheeses. The gold medals didn’t stop there: also awarded were Maasdam in the European-style category and Fenugreek Gouda in the Dutch-style category.

This is the second time Miel has received the Champion Cheesemaker Award, the first being 2011 as the youngest person to ever receive the honour.

Miel attributes the success to his parents; they have laid a solid foundation for him and his siblings. He also points out that Geert, as the cheesemaker, is responsible for consistency in cheese quality and Bert and Sophia run the farm efficiently. This year Meyer won nine medals out of 11 entries; last year it won 10 medals out 11 entries, most being gold.

“For us those medals are worth more than the big wins we have had,” Miel told Dairy News.

He attributes the consistency in quality to the business having its own milk supply. “We get the milk from the same cows every day; that’s consistency – not getting milk from Thames one day and Taupo the next. It’s the same farm, same animals. If we bought the milk from Fonterra, the milk would come from a different farm each day.”

Ben, an electronics engineer and Fieke, a school teacher, got their passion for cheesemaking back in Holland in 1976 on Ben’s father’s dairy farm.

After emigrating to New Zealand, they discovered the climate great for dairy and cheesemaking. Ben started making cheese in Hautapu but soon realised the quality of milk supplied by Fonterra (then known as NZ Dairy Group) differed day-to-day.

He knew buying a farm was the only option. Four years after buying the farm Ben won the supreme champion award in Wellington.

Miel says for his dad the key was being in control of milk quality on the farm. “He could interact with the sharemilker of the day about milk quality; the best way to do that is talking to your farmer not the guy you pay for milk and not Fonterra.”

Today, the farm produces 9000L during the peak season; 30% is bought by Meyer and the rest is sold to Fonterra.

Miel says having its own milk supply offers Meyer “flexibility to [manufacture] with whatever volume we like; if we want to make a batch of cheese with 3000L of milk, we can do that. We will tell Bert and he will have that ready for us.

“The next day we will process 5000L; that’s the convenience of having the milk supply on site and there’s a pipe from the cowshed to the cheese factory where the milk comes through; so it makes those decisions easy.”

Meyer’s cheese business is seasonal, based on the farm’s milk supply. “We are not forced to make cheese on public holidays and weekends; it’s easy for staff as well.

“Gouda is a hard, aged cheese; it ages and stores well so we have to make enough cheese in the summer, during the flush from September to March, and forecast what we can sell during winter.

“It’s a seasonal business; right now we are taking most of the milk as they are slowly drying off; in the flush we take 30% and the rest goes to Fonterra.

“That’s a good set-up; we are lucky that we are not forced to take all the milk because that would be a big problem for us; we can only deal with 5000L/day.”

This year Meyer hopes to produce 50 tonnes of cheese; next year it hopes to make 60 tonnes.

Kiwis take it all

Meyer Gouda sells the bulk of its cheeses in New Zealand.

The company is also looking at resuming exports to Australia; it stopped exporting after failing keep up with demand.

“A couple of years ago we exported to Australia; it went so well we had to stop,” says Miel Meyer. “The order for 30 wheels a month turned into 30 wheels every second week.”

He wants to send 20 wheels of Meyer Gouda to Australia from next month.

“We get the same milk every day; there are seasonal changes in the milk solids component so it changes gradually as the year goes by.

“Those small changes are easy to notice for the cheese maker

“Imagine getting milk from the wetlands one day, the highlands the next day, from different parts of the country with drought in one area and wet in another; the milk would be very different.

“To make the same cheese two days in a row from milk that’s come from different parts of the country is hard.

“We see a difference when it’s sunny one day and the milk comes through; then if it rains the next day the milk is different.”

Seifried Estate’s 2019 Sauvignon Blanc is so laden with award stickers, it looks set to topple over.