Californian farmers battling on all fronts 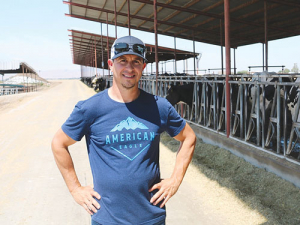 Farmers frustrated at a state government they feel doesn’t appreciate their value to the world’s fifth-largest economy grumbled to a group of Kiwi farmers who travelled to California with Alltech. They also attended the company’s annual ‘One: Ideas Conference’ in Lexington, Kentucky.

Dairy farmers on California’s coast use pasture and most are certified organic to get best prices. Farmers in the nearby Central Valley use total mixed ration systems and rely on irrigation.

However, the farmers visited had similar concerns about the future, notably over-regulation and looming labour shortages.

When David de Sousa, a second-generation farmer south of Modesto, was asked the biggest problem facing the dairy industry in California, he replied:

“We have the highest milk cost-of-production in the US because of land prices and the cost of regulation. We have the biggest farms in the US now because people need to grow to stay alive.”

De Sousa’s father, Armelin, came to the US with only “money in his pocket” and now owns two farms, milking 2200 cows and running 4000 head.

“My father built an empire; that couldn’t be done today,” de Sousa said.

“We’re cutting costs at moment but in three years there will be a drastic minimum wage rise.”

The de Sousas are paying $14/hour and providing housing and all utilities; they employ 20 staff on the two farms.

California farmers must comply with strict environmental regulations that add more costs. The de Sousas recently had to lay concrete pads under their manure and silage, costing $200,000.

“Now the government is talking about a ‘cow fart’ tax. Once you get into that you know your industry is over-regulated.”

Property tax rates are also rising as the land values rise due to demand caused by the profitability of almond plantations. This district has doubled in value in two years from $37,500 to $75,000/ha.

De Sousa said farmers can grow 2270 - 3400kg of almonds per hectare and receive $1.80/kg. They planted 14ha of their farm in almond trees three years ago.

“We’re trying to jump on the winning team,” he said.

Fourth-generation farmer Jennifer Beretta, in Beretta Dairy, Santa Rosa, says the children and grandchildren of the Mexican immigrants who used to work on farms now want to work in factories, making workers harder to find. “When we were kids growing up on this farm, people would come here daily looking for work. Now they don’t, but if they do, the first thing they ask is ‘do you provide a house?’ ”

Californian regulations hamper building housing on a farm: this can take up to 12 months for approval; a dairy or new barn may take 2-3 years. “Permits are crazy,” she said.

Fiscalini farms, which milks 1500 cows at Modesta in California’s Central Valley, has won World’s Best Cheddar at the World Cheese Awards in London on three occasions for its Bandaged Wrapped Cheddar.

General manager Brian Fiscalini said they began cheese making in 2000 in a bid to “escape the Californian milk pricing system”.

“There either seems to be too much milk or not enough,” Fiscalini said.  “We’re not confident California will fix the system.

“Here you need to get real big real fast or change the revenue market from fluid commodity milk to cheese.”

Cheese sales are now 30% of his company’s revenue and the aim is to grow this to 100%, shunning investors so they can fully control the business.

“Until we use 50% of the milk we produce, we can’t engage in a contract; we have to pay market price. California is a very hard place to do business. There is a lot of regulation and many laws are not pro-business. Dairies are going to South Dakota, Idaho and Nevada to expand.”

• Alltech funded Stephen Cooke’s attendance at the Alltech ONE Conference and tour to California.