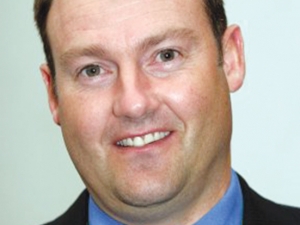 Knee-jerk spending cuts that compromise long-term productivity are a real risk in the face of the $4.50/kgMS payout forecast and probable low opening 2015-16 figure, leading farmers are warning.

“We’ve been investing in our farms pretty heavily and that will continue at the same rate this coming season,” Dairy Holdings chief executive Colin Glass told Dairy News. “We’ve also invested quite heavily in dairy support so this winter we will nearly, but not quite, be self sufficient.”

That means the group, which has 58 dairy farms, mostly in Canterbury, has much better control over replacement grazing and cow wintering costs, he says.

Ongoing investment in the milking platforms is part of a five year plan to upgrade infrastructure, notably irrigation, which is increasing pasture production, reducing nutrient loss and cutting the cost per kilogramme of milk production.

“In our experience anything that increases the amount of pasture you can grow and harvest increases your profitability…. Strategic supplementary feed is a tool we call on from time to time but it is all about how good you are as a pasture manager.”

That said, all costs are under the microscope across the group, he adds.

“Every dollar is a prisoner for us. We are looking very carefully at everything we spend. If it’s not contributing to increasing production and the bottom line then it has to be questioned.”

At LUDF the importance of pasture productivity was also stressed. The high profile 560-cow unit has cut next year’s pasture renewal budget from 15% of the 160ha milking platform to 10% but it’s been done on economic analysis, Graham Kerr of Agriseeds and a member of the farm’s management team, told the focus day.

“Next year is going to be tight, but you’ve also got to chase production to dilute your costs. Regrassing is still highly economic if you get a response that makes a poorly performing paddock a high performing paddock. Do the paddock analysis and the sums rather than working to a recipe,” he urged.

Another more immediate corner that’s being cut on some farms – but not LUDF – is teat seal.

“For us it’s a management thing,” said LUDF manager Peter Hancox. “It is quite a cost… but it’s a huge benefit in management and time not having a lot of red cows through the spring.”

In fact, across the board budgets for next season are “not a lot different” from the one just gone which is heading for farm working expenses of $4.03/kgMS, said Hancox. “We’ll still DNA the herd, keep on top of BVD…. In this type of grass only system there’s not a lot more you can pull out.”

That was echoed by SIDDC executive director Ron Pellow. “We’ve chosen a farm system that has a lot of locked-in cost.” About 50% is staff and grazing, and cuts in other areas would simply be “deferring maintenance or eroding the long-

term profitability of the farm”.

For example, a one-year cut in breeding costs by selecting cheaper bulls, or more natural mating, could have a six-eight year impact on herd productivity.

As for staffing, while four people for 560 cows might seem over the top, Pellow suggests looking at hours worked per kg of milk produced is a better “metric”. “The people per cow metric may not be very helpful…. We want to be looking at the long-term, not just the short-term.”

More extreme system changes, such as bringing replacement rearing back onto the platform, are not on the table at this stage.

“If this year is the new normal, then it is something we’ll need to look at. But if this is just two low years and the next three to five years we’re back into where we’ve been for the previous four to five years, will that be the right answer? It’s an important question.”

Farmers must do the right thing on M. bovis

Farmers selling cattle have a duty to disclose if the animals have been under Mycoplasma bovis testing, says Dairy Holdings chief executive Colin Glass.

The dairy downturn could be an indicator of how the economy will suffer if farmers have to reduce inputs to meet environmental compliance standards.

Primary Industries Minister Nathan Guy recently launched a new scheme to lift the productivity and profitability of sheep and beef farmers in Manawatu-Whanganui.

An upcoming farm focus day will be an opportunity for dairy farmers to see a joint venture demonstration farm in operation and hear from industry experts.