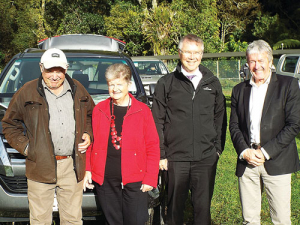 The double-D’S were front and centre at Karapiro, Waikato, recently to promote a voluntary water quality initiative.

The plan was developed largely from principles set out in the 2015 Industry-Agreed Management Practices first applied by Environment Canterbury.

The chief aim is to help make rivers swimmable and to improve the ecology of waterways, so the plan advocates good farming practices -- assessing individual and regional catchments, measuring and showing improvements and telling the public about progress.

At grassroots level this will see workable plans being drawn up to identify physical and topographical constraints, and identify land where cropping should cease because of erosion risks. The plan includes keeping accurate records of inputs and outputs, and managing run-off, sediments and nutrients entering waterways.

Environment Minister David Parker applauded the voluntary nature of the plan and conceded that regulation “might not be the b-all and end-all”. But he said rules and regulations would be part of the solution, as would better education and perhaps “pricing” to influence behaviour.

Parker’s former flatmate Minister Damien O’Connor noted “the need for guidelines in tune with the environment, and for a part of the social licence that allows landowners to operate”.

NZ agriculture and horticulture needs to be the best producer in the world, he said, with their output “food for people who care, produced by farmers and growers who care”.

The plan now is to spend the next two years enlisting farms and local and regional authorities in a campaign going through to 2030.