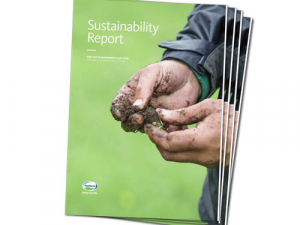 Fonterra has released its second annual Sustainability Report covering how the co-op is progressing towards its environmental, social and economic goals.

Fonterra CEO Miles Hurrell says the report is one of the ways Fonterra is showing where it’s at and where it needs to get to in sustainability.

“There are areas where we’re leading our industry thanks to the hard work of our farmers, people and partners. But there are also areas where we’ve tried and haven’t hit the mark yet, and the report doesn’t shy away from that,” says Hurrell.

“We have considerable scale and with that comes the opportunity, and the responsibility, to influence for good. That’s exactly what we’re working to do, by producing dairy in a way that cares for people, animals and the land, and brings long-term value to our communities.”

New Zealand farmers lead the world in many aspects of sustainable dairying, with high productivity, year-round pasture grazing and lower use of supplementary feeds. However, the scale of the industry in New Zealand means that dairy’s environmental footprint is of national significance.

“Our farmers have led the way with excluding cows from waterways but other areas are going to take longer, like lowering greenhouse gas emissions both on farm and in manufacturing,” says Fonterra’s director of sustainability Carolyn Mortland.

“Our ambition is to make the best nutrition in a way that regenerates our farms, our country and the world. The challenges associated with this are significant, but we’re committed to making a difference.”

The Sustainability Report 2018 was prepared using the internationally recognised Global Reporting Initiative (GRI) Standards and has been independently assured.

The report is organised into the three pillars of Fonterra’s sustainability framework – Nutrition, Environment, Community – with some of the highlights included below.

Fonterra is focused on providing healthy and responsible products to people around the world to help address public health challenges, improve access to adequate nutrition and contribute positively to the wellbeing of individuals.

- Fonterra launched a new dedicated medical nutrition division. The team is tasked with pioneering dairy nutrition solutions to help people recovering from disease and illness at all stages of life, as well as helping people age in good health.

- 71% of Fonterra’s everyday and advanced nutrition products meet Fonterra’s Food and Nutrition Guidelines, which were endorsed by the New Zealand Nutrition Foundation. This is working towards a target of 75% by 2020, and 100% by 2025.

- A process that has previously taken hours can now be done in minutes – 92% of Fonterra’s products are totally electronically traceable, on the way to a target of 100% by 2020.

Fonterra is focused on protecting the environment by improving the health and biodiversity of its land and waters, transitioning to a low-carbon future, improving productivity and minimising waste from farm to consumer.

- The farmers who supply us milk in New Zealand have among the lowest greenhouse gas emissions per litre of milk collected in the world (0.87 per kg CO2-e/kg FPCM).

- Fonterra farmers have fenced 99.6% of permanent waterways and installed bridges or culverts at 99.9% of regular crossings. This major investment by farmers to keep cows out of waterways is now considered complete, although continued investment will be required to maintain the exclusion.

- At Brightwater, the site’s boiler has been converted to co-fire with wood biomass. The conversion cuts carbon emissions at the site by around 2,400 tonnes a year – roughly the same as taking 530 cars off the road.

- A recent water recycling innovation at Fonterra’s Pahiatua manufacturing site will save about half a million litres of water a day this season.

- 2018 marked the half-way point of Fonterra’s 10-year Living Water partnership with the Department of Conservation focusing on five freshwater catchments. Fonterra has committed to help restore another 50 catchments as part of its ambitious water plan. Working with community stakeholders, these catchments have been identified and action planning is underway.

Fonterra is focused on contributing positively to its communities: its farmers, and other people who supply the Co-operative with goods and services, its employees all around the world, and the wider communities in which it operates.

- Fonterra halved its gender pay gap in New Zealand from 4% to 2%, against a national average of 9.2%.

- Fonterra Milk for Schools celebrated its fifth year and delivered its 100 millionth portion of milk. It is helping more than 140,000 Kiwi kids every school day.

- The KickStart Start Breakfast programme – which Fonterra delivers in partnership with Sanitarium and the New Zealand Government – grew to 976 breakfast clubs and served more than 125,000 breakfasts every school week.