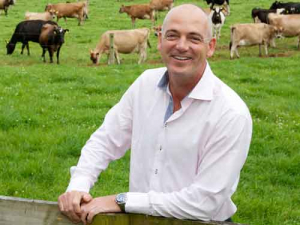 Fonterra chief executive Theo Spierings says volumes for the year were down by 5%, driven by lower inventory.

The co-op had a weak first quarter: in the third quarter in ingredients, sales were up 9% and China had growth of 12%.

Commodities WMP, butter and skim milk powder are selling at a premium which is translated into milk price, he says.

The milk price increase is pretty sharp at the end of the year affecting margins in ingredients and customer food service at the back end of the season.

“There is always a natural lag in being able to pass through an increase in our input costs. But this increase has been both rapid and late in the year, making it difficult for these higher costs to flow through into our sales for this financial year.

“Against this backdrop, we can see our sales margins are not where they need to be at this point in the year to achieve our original earnings forecast.”

Figures presented show gross margins for consumer and food service in Asia for the nine months were 24%, down from 29% in the equivalent period last year; in Greater China 22%, down from 32%; in Oceania 20%, down from 24%; and Latin America 29%, down from 31%.

Another development is strong growth in China imports – 12% over quarter three, says Spierings. But it is lower than the year before, especially in fat products such as butter. Liquid milk equivalents (LME) have dropped from 400m LME, and growth of consumer goods service to under 130m LME. Adding the two years together they are still on a pathway of 400m LME per year but it is less than expected.