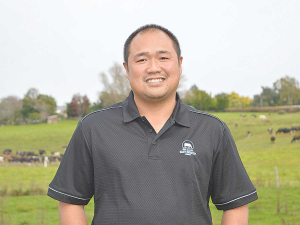 Christopher Vila says entering the dairy industry as an immigrant can be challenging.

In two weeks, he joins 10 other regional farm manager winners at the New Zealand Dairy Awards national finals in Hamilton.

Vila is Waikato's Farm Manager of the Year and will be gunning for the national title.

A trained vet, he moved to New Zealand 13 years ago. Starting as a farm assistant on a 1,200-cow farm in Reporoa he worked his way up to his current role sevent years ago - farm manager on a 340-cow family trust farm in Ohaupo, outside Hamilton.

Entering the dairy industry as an immigrant can be challenging: starting from the lowest level without adequate support and mentorship isn't easy.

However, Vila believes this can be turned into an advantage.

"As a migrant worker you start with no networks, no money and go about achieving your goals in a new country," he told Dairy News.

"For me, personally, it took six years to become a farm manager... some people may see this as a disadvantage.

"But I see one advantage... Starting from the bottom motivates you to work extra hard, accumulate and master knowledge and skills needed, think outside the box and catch up with those who have a head start."

Vila says Filipinos working in the NZ dairy industry have made a good name, but he had a message for migrant workers.

"I hear from farmers that Filipino staff are hardworking and dedicated. It is something to be celebrated and to be proud of.

"However, there is also the other side of the coin: we also hear negative accounts about some migrant workers leaving the industry once they get their residency.

"Once they obtain their 'NZ dream', they change industry/careers.

"In my humble opinion, migrant workers should strive to stay in the industry and pay back for the opportunity the industry has given to achieve your dreams."

Vila says he remains committed to the industry.

"I owe a lot to the dairy industry," he says.

A sharemilking or contract milking position would be the next step, but Vila is in no rush.

"As of now, I'm basically happy. I'm working for a very supportive family."

Cows are fed mostly pasture, some maize is grown on farm and cows also get 3kg DM/day in the form of blended meal in the milking shed.

Vila is enjoying working for the family trust farm. When he arrived seven years ago, farm production was 135,000kgMS. In his first year Vila helped the farm achieve 144,000kgMS and is on track for a record 165,000kgMS this season.

Vila lives on the farm with wife Jonah and daughter Lily. He works a twelve day on, two day off roster.

He thanks his wife for being a pillar of strength during his early years in New Zealand.</p.

He urges them to be an active member of the industry and learn from other farm managers and sharemilkers in the industry.

"I know it is common to be uncomfortable to be exposed and difficult to step out of our comfort zone," he says.

Migrant workers can gain something new by networking with other like-minded workers.

"It's an open field and judging is based on your skills, capability and work ethics," he says.

"I didn't know whether I was up to it. After winning the regional title I still didn't believe I had won.

"It's the first time I have won any award of any kind. It just shows migrant workers that through hard work and dedication, we can achieve something great in this industry."

Securing a great employer is the key for young people entering the dairy industry.

Nothing to lose, much to gain

Bay of Plenty Share Farmer of the Year winners Scott and Becks O’Brien say farmers have nothing to lose and everything to gain in Dairy Industry Awards.

Central Plateau Dairy Manager of the Year, Satveer Singh, comes from a farming background in India, where his father is an organic farmer with Sahiwal cows.

A former Auckland sales and marketing executive and a former adventure tourism guide and boutique lodge manager have won the 2022 Central Plateau Share Farmer of the Year title.